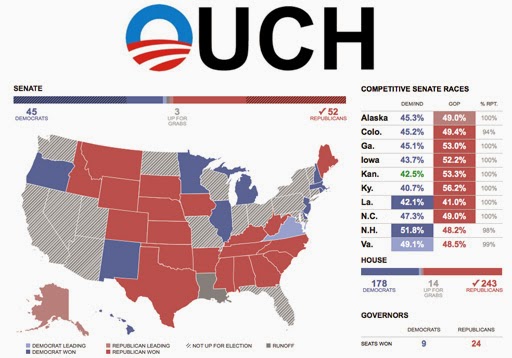 After an election night that was just about what everyone expected – low turnout, “6th year curse” for incumbent president giving power to opposition party, and general malaise about the country – there were a few bright spots for The Randy Report:

• Dallas voters overwhelmingly added nondiscrimination protections for LGBT city employees to the City Charter on Tuesday by a vote of 77 to 23 percent opposed. See?  Not all Texans are assholes…

• In Massachusetts, Laura Healy became the first out Attorney General in the nation.

• Gov. John Hickenlooper squeaked out reelection in presidential swing state Colorado – that will be important come 2016

• LGBT ally Tom Wolf beat Pennsylvania’s Tom Corbett to take the governor’s mansion in that state. Wolf has stated he would sign hate crime legislation into law to help curb anti-gay attacks like the one in Philadelphia recently.

• Former half-term Massachusetts senator (and carpetbagger) Scott Brown made history as the first man to lose twice to female candidates for the US Senate having lost two years ago in Massachusetts to Elizabeth Warren and last night to Jeanne Shaheen in New Hampshire.

At the end of the day, it’s important that what happened last night is not unusual. Presidents Reagan, Clinton and George W. Bush all saw their party lose control of the Senate during midterm contests.

While I wouldn’t have chosen last night’s results, what will be interesting now that the Republicans control both chamber of Congress is this: Will they NOW do something to help the country, or will they continue to be obstructionists?  More obstruction will make the electorate more discontent, but actually doing something for the country could give accomplishments to the Obama column… Which will it be?

Last thought – we heard for the past two years how this the 2014 Senate map was bad for Democrats with the majority of Senate seats in play being Dems.  Well, 2016 will flip the script on the GOP. There will be 23 Republican seats up compared to just 10 for Democrats. And five of those — Illinois, New Hampshire, Ohio, Pennsylvania and Wisconsin — Obama won in 2008 and 2012.