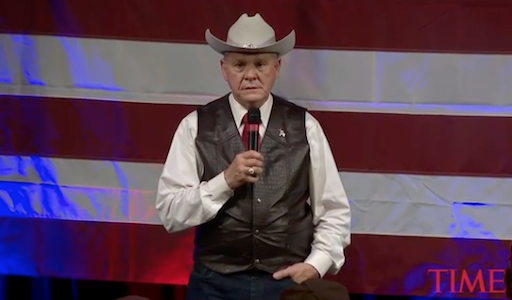 Tully Borland, of the ultra-conservative The Federalist, has gone all and said in public what many conservatives really feel about Alabama GOP nominee Roy Moore: Even if Moore did have sex with a 14 year-old, it’s better to vote for him rather than a Democrat.

Here’s the main thrust of the piece:

Here is one thing we know and should admit from the start: in his early thirties, Moore had a penchant for dating teenagers. Apparently, this was not an uncommon occurrence during this time. In fact, this practice has a long history and is not without some merit if one wants to raise a large family.

To have a large family, the wife must start having kids when she is young. The husband needs to be well-established and able to support the family, in which case he will typically need to marry when older.

Times have changed. But, like it or not, four decades ago Moore dated teenagers (even his wife is 14 years younger than he).

But let’s suppose the accusations are mostly true. Then from a conservative moral perspective, Moore is guilty of lying, trying to have pre-marital sexual relations with girls half his age, and pressuring them to do so without first determining that they reciprocate. There is no sugar-coating what he did. Moore was a dirt bag and is currently lying about his actions rather than confessing the truth and asking for forgiveness.

If elected, Moore would join the ranks of other undignified politicians who have been liars and fornicators. I have a 14-year-old daughter. If I caught him doing what was alleged, for starters I would kick him where it counts. Hard. That being said, I don’t think it’s wrong to vote for Moore.

Borland goes on to say that voting for Democrat Doug Jones would be far worse than Moore because Jones supports abortion rights which kills more people.

Even conservatives on Twitter weren’t buying this load of crap.

There it is. The Federalist says it’s okay to vote for a sexual predator & assaulter of children because abortion. pic.twitter.com/tvKJdUKHLP

“I have a 14-year old daughter. If I caught Roy Moore doing what was alleged, I would kick him where it counts. But if he did it to 9 girls who aren’t MY daughter, I’m ok with putting him in the US Senate.” – The Federalist, redux

Oh for the love of God, just stop. https://t.co/7UYAgrOGnN

Good gravy. I think he cribbed this from a manual on how to raise livestock.