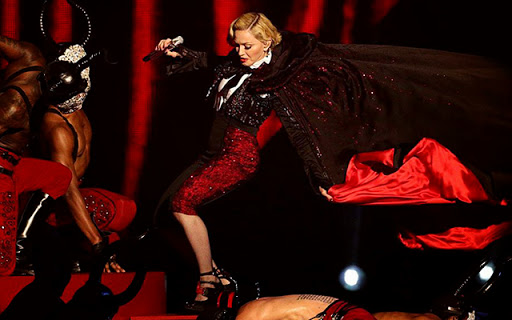 Madonna has been in the spotlight of late (nothing new there), thanks in part to her fab Grammy Awards performance, and “not so much thanks” for her unfortunate tumble from the stage yesterday at The Brit Awards.

Her Madge-esty said in a recent interview with Rolling Stone that even when she delivers a great performance she gets flack about whether or not she’s “acting her age.”

“It’s still the one area where you can totally discriminate against somebody,” she says, “and talk shit. Because of their age. Only females, though. Not males. So in that respect we still live in a very sexist society.”

The fact of the matter is: Madonna still ranks at the top of her game as an entertainer, an artist and a provocateur. Her “Living For Love” Grammy Awards performance proved it.

But just as telling was her recent fall from the stage of The Brit Awards, clearly due to a wardrobe malfunction. She soon after shared on Instagram that “Armani hooked me up! My beautiful cape was tied too tight! But nothing can stop me and love really lifted me up! Thanks for your good wishes! I’m fine!”

And she WAS fine. She regrouped instantly, got up and finished the number. Like a true artist.

(p.s. from the audio we also have proof that she was singing LIVE, not lip-syncing, btw…)

Things happen. People trip or fall. You get back up and keeping moving forward. Just like Madonna did.

I did want to throw one thing out there about that incident, though. I saw lots of fans respond to the fall with “Fire that dancer!,” referring to the dancer who pulled the cape.

First of all, Madonna prides herself on the fact she hires the best dancers in the business. Whoever that dancer was, he wasn’t some “newbie” who wouldn’t know what he’s doing.

Second, I know from dancing myself for decades professionally that the performance was rehearsed within an inch of it’s life. I’m sure that dancer did exactly as he was rehearsed.

Third, as Madonna later alluded – the cape was tied too tight. If you watch the video clip of the fall, right before “the Moment” you can see her trying to untie the cape. The dancer pulled on the count he was rehearsed to pull on. She had her back to him, so there was no way he could see if the tie was undone. He did his job.

Fourth, some have asked “why didn’t the dancers help her up?” Here’s the thing – when something like this happens, pretty much all the dancers know is what has been rehearsed into their bodies for hours and hours. Before the moment could even register, Madge was up and back in gear.

Plus, I can attest to what it’s like to be onstage with a legend when they fall.

While I was still performing in CHICAGO the Musical in Las Vegas, Broadway icon Chita Rivera came into the company for a period of time to play the role of “Roxie Hart.” As a swing, I wasn’t onstage every night. But the first time I went on with Chita in the show was in a track where I danced next to her in the Act Two opener “Me And My Baby.”

In the middle of the number, Chita’s shoe slipped out from under her – and down she went. At my feet. She was back up and laughing as she finished the number but in my head I jokingly heard “Fire the new boy!”

In truth, I paused not knowing what the best reaction would have been: help her up (does that make her look old?) or let her get up (does that make me look insensitive?). In truth, the moment was SO quick that in the second I thought about it she was back on her feet.

I’m certain the same thing happened to Madonna’s dancers. When something so unexpected happens during a moment that is rehearsed and rehearsed within an inch of it’s life – you do pause.

If the legend who falls happens to be Madonna? Well, as she sings in “Living For Love:”

You can trust this “queen.”

Or, if not me, trust THE Queen. Because she still is.

Watch the FULL performance from The Brit Awards. She’s fab.