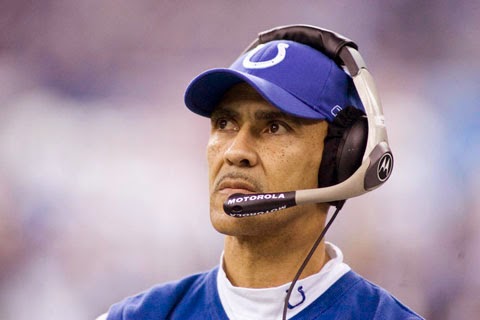 “I wouldn’t have taken him. Not because I don’t believe Michael Sam should have a chance to play, but I wouldn’t want to deal with all of it.

“It’s not going to be totally smooth … things will happen.”

Since that statement, Dungy has continued to receive criticism for the comments.

This is the same man who defended Michael Vick – convicted and sent to prison for animal cruelty to dogs. Of Vick’s crimes, the Orlando Sentinel wrote this:

Vick’s crime was dog-fighting. Those who didn’t make the cut were shot, beaten and electrocuted. Three dogs were hanged, according to a report by the USDA inspector general, “by placing a nylon cord over a 2 x 4 that was nailed to two trees.” ” Three more dogs drowned after Vick’s crew put their heads in a 5 gallon bucket of water.

Got that? Kinda serious, right? But Dungy stood by a man who tortured innocent animals and said he deserved a second chance.

But about Michael Sam? A man who had harmed no one? No such open-mindedness. Because Dungy “wouldn’t want to deal with it.”

So let’s get this all straight:

And I’m not even going to go into the fact that just some years ago, being a coach of “color” was not something NFL team owners “wanted to deal with.”  Good thing for Dungy times got better and people evolved on that level.

By the way, it should be noted that in the past, Tony Dungy – leader of men – has helped raise money for anti-gay campaigns and has made it clear he does not agree with a “homosexual lifestyle.”

Check out Keith Olbermann’s take-down of Dungy below.  Starts at the 2:00 mark: