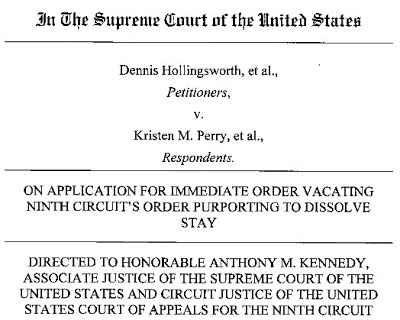 As a last roar, they make their “hail Mary”…

Via press release from Protect Marriage:

Today our Prop 8 Legal Defense Team filed an emergency petition to U.S. Supreme Court to stop the Ninth Circuit’s premature move requiring same-sex “marriage” licenses in California. The petition, prepared overnight by our good friends at Alliance Defending Freedom, was submitted Saturday to Justice Anthony Kennedy, the associate justice who decides such motions pertaining to the Ninth Circuit. On Wednesday, Justice Kennedy had agreed with our view that the voice of the voters must heard in a case like this challenging an initiative proposition.

Today’s petition asks the Supreme Court to find that the Ninth Circuit had no jurisdiction to order same-sex marriages on Friday, since the case had not yet come back down from the nation’s highest court.

Suspiciously, the Ninth Circuit’s announcement late Friday ordering same-sex marriages came as a surprise, without any warning or notice to Proposition 8’s official proponents. However, the same-sex couple plaintiffs in the case, their media teams, San Francisco City Hall, L.A. Mayor Antonio Villaraigosa and the California Attorney General all happened to be in position to perform same-sex marriages just minutes after the Ninth Circuit’s “unexpected” announcement.

SCOTUSblog says they are wasting their time.

As a formal matter, the Ninth Circuit did not put the Supreme Court’s ruling in the Proposition 8 case into effect prematurely. The Supreme Court held that the proponents of Proposition 8 could not file appeals in federal court. That ruling says nothing about imposing or lifting a stay on same-sex marriage. The court of appeals likely has the authority to act with respect to its own previously entered stay, which is a form of controlling its own docket. Although the court of appeals had previously stated that they stay would remain in effect until the Supreme Court’s ruling was final, it presumably can change its mind.

SRSLY? You guys lost. The good guys won. You don’t even have standing in the eyes of SCOTUS to argue the case. You just want to f**k with people now.

This is what makes you hateful. Thus – a hate group.

If you think this is “Christ-like” you are fooling yourselves…