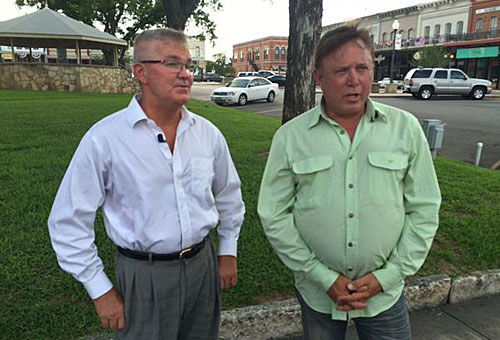 Several weeks ago, after the U.S. Supreme Court ruled that same-sex marriage was constitutional and became the law of the land, Hood County Clerk Katie Lang of Texas decided she was going to keep fighting against marriage equality. To the tune of $43,872.10.

That is what it has now cost Texas tax payers because Ms. Lang felt the need to indulge in just one more anti-gay temper tantrum. A $43K temper tantrum.

It has been a month since Joe Stapleton and Jim Cato finally got the marriage license Hood County Clerk Katie Lang denied them because of her religious beliefs. It only took a federal lawsuit to get it.

Today that suit was settled, and according to the attorneys representing Stapleton and Cato, Lang’s refusal to issue the license ended up costing Hood County $43,872.10 in attorney’s fees. They will now move to dismiss the suit.

“It is a shame that Hood County Clerk Katie Lang refused to follow the rule of law, causing our clients to go through the difficulties of hiring lawyers and filing a federal lawsuit to obtain the marriage license to which they are constitutionally entitled,” says attorney Pat O’Connell, one of Stapleton and Cato’s attorneys.

“And it is sad that the taxpayers of Hood County have to pay the price for their elected official’s misconduct.”

I imagine Lang thought she was showboating for her constituents. I wonder how those voters feel now that it’s cost them tens of thousands of dollars to arrive at the inevitable.

By the way, I hear the attorneys for Joe and Jim plan to donate some of their fee to Equality Texas Foundation. So, I guess Clerk Lang can sleep soundly knowing her homophobia will now result in funding a pro-LGBT equality group!

Here’s some background on the story when it first began in June.