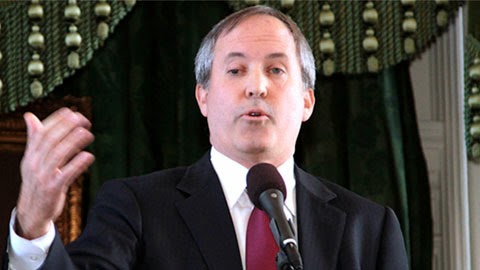 Texas Attorney General Ken Paxton has announced that he believes the same-sex marriage performed in Travis County is “void” due to yesterday afternoon’s ruling by the state Supreme Court.

The county clerk who issued the license disagrees.

“The Court’s action upholds our state constitution and stays these rulings by activist judges in Travis County,” Paxton said in a statement. “The same-sex marriage license issued by the Travis County Clerk is void, just as any license issued in violation of state law would be. I will continue to defend the will of the people of Texas, who have defined marriage as between one man and one woman, against any judicial activism or overreach.”

According to the Travis County clerk’s office, Judge David Wahlberg signed a state court order Thursday, commanding Travis County Clerk Dana Debeauvoir to “cease and desist relying on the unconstitutional Texas prohibitions against same-sex marriage as a basis for not issuing a marriage license specifically to Plaintiffs Sarah Goodfriend and Suzanne Bryant” because Goodfriend has ovarian cancer.

The couple married under the judge’s one-time court order. The Texas Supreme Court issued an emergency order blocking gay couples from obtaining marriage licenses after the couple wed Thursday. Despite the attorney general’s statement, Debeauvoir said the marriage still stands. In a statement, the clerk’s office said, “The Texas Supreme Court order on the Motion for Temporary Relief has stayed further proceedings in the trial court, and is not directed at the County Clerk. “I have every reason to believe that the actions I took this morning were legally correct based on the trial court’s order, and that the license my office issued was then and is now valid. There is no further action for me to take at this time,” Debeauvoir said in a statement.

The couple, Sarah Goodfriend and Suzanne Bryant, have been together for over 30 years.