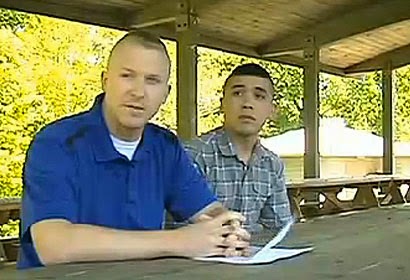 US veterans Anthony Wilfert and Brian Blas of Nolensville, Tenn., say Mint Springs Farm, which makes a point on it’s website to say it is “an all-inclusive venue,” agreed to host their commitment ceremony.

Wilfert and Blas said days after two employees told them it’d be fine to hold their ceremony at the venue, they got an e-mail from an owner at Mint Springs Farm reading, “Unfortunately, until same sex marriage is legal in the state of Tennessee, we cannot participate in this ceremony at our venue. I wish we could help, I truly do, but our hands are tied in this situation.”

“It is a private venue,” said Wilfert. “We purposefully chose a place that is not tied to a religious organization for that reason, so to mention something about state law is baffling.”

Wilfert also added, “To have fought in the military for freedoms and liberties of all Americans, it can be quite deflating to come back to fight a whole new set of obstacles.”

What is of interest to me is that the ceremony was NOT being described as a “marriage.” The couple was very clear it was a “commitment ceremony” which carries no legal weight. Commitment ceremonies are not illegal in Tennessee. So, what is really the issue here?