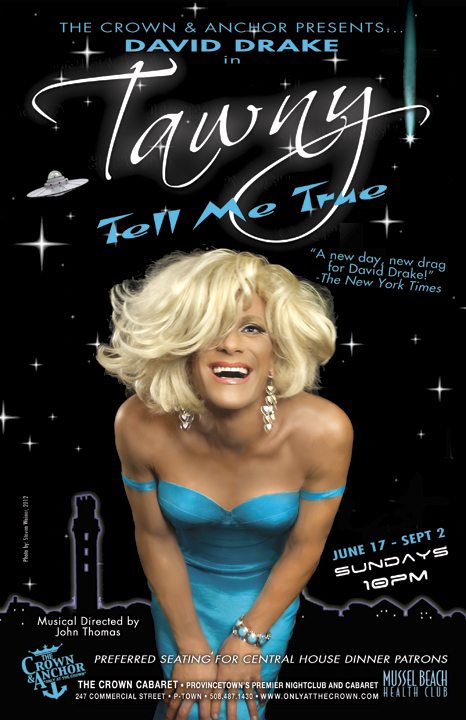 Here at The Randy Report we love all things Tawny.  So I was thrilled to receive the news that Tawny will continue her acclaimed “come-back” this summer in Provincetown.

Following on the heels of her sold-out holiday show in Provincetown last Christmas, and her critically acclaimed debut at the Laurie Beechman Theater in New York City this past February, David Drake’s newest theatrical creation ‘Tawny Heatherton’ will bring her blonde-swept brand of sunny, funny cheer back to the tip of the Cape for her very first summer-long engagement – with the premiere of TAWNY, TELL ME TRUE at the Crown & Anchor in Provincetown, MA.

With onstage musical direction by John Thomas, TAWNY, TELL ME TRUE opens June 17th and performs every Sunday at 10PM thru Sept 2nd in the Crown Cabaret Room of the Crown & Anchor, 247 Commercial Street. Tickets are $25, and can be obtained in-person at the box office, or online at www.onlyatthecrown.com. (Note: *No performance on July 8th.)

Written by and starring Obie Award winner David Drake (The Night Larry Kramer Kissed Me), TAWNY, TELL ME TRUE marks the unheralded return of Tawny Heatherton, a lovably eccentric showbiz survivor and “one hit wonder” of the disco zeitgeist of the 1980s. In the show, Tawny sings and regales the audience with hilarious tales of her globetrotting life-on-the-road – including her headline-grabbing turn as the unwitting “Pyro Girl of Long Island,” her short-lived stint as a Hee-Haw “Honey,” and Tawny’s quest to reunite with her long-lost aunt Joey Heatherton, whom she last saw in the parking lot of the Mohegan Sun Resort & Casino. Oh, and of course, her abduction by aliens.

Check out video highlights of Tawny and her world.