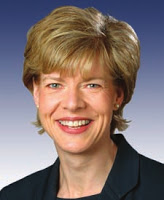 With Sen. Herb Kohl announcing his retirement from the US Senate, sources close to Rep. Tammy Baldwin, D-Wis., have told the Gay & Lesbian Victory Fund she is very likely to run for the U.S. Senate seat. If Baldwin runs and wins, she would become the nation’s first openly LGBT member of the U.S. senate.

“This would obviously be a top priority for us. Tammy Baldwin has been an outstanding congresswoman, and she’d be an outstanding senator,” said Chuck Wolfe, president and CEO of the Gay & Lesbian Victory Fund, which has endorsed Baldwin repeatedly.

“This would be a remarkable milestone for LGBT Americans. Congresswoman Baldwin is one of the most admired public officials I know. She would have the strong support of those who want to see our economy work for all Americans, and who believe that all voices deserve a place at the table,” Wolfe said.

I’ve met Rep. Baldwin here in Las Vegas and she’s really smart and inspiring. Talking to her you really get a sense that she not only ‘means’ to do the right thing, but she ‘does’ the right thing.

Here’s hoping we get good news about a senate run in Wisconsin soon.
(via gaypolitics.com)