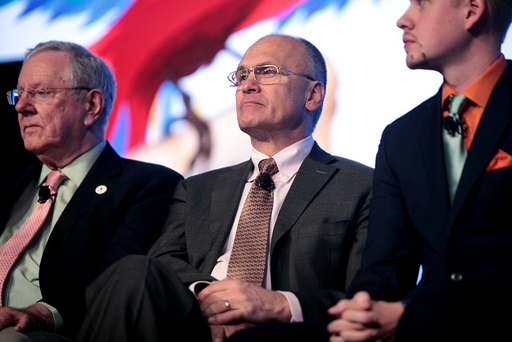 President Trump’s nominee for Department of Labor Secretary will be pulling his name from consideration.

According to reports, there are four firm Republican  “no” votes against  nominee Andy Puzder, and possibly as many as twelve. With a Republican majority in the Senate of only 52, Puzder is clearly doomed.

President Trump’s nominee to lead the Labor Department, Andy Puzder, is expected to withdraw his nomination, according to a number of reports Wednesday.

The Senate Health, Education, Labor and Pensions Committee was scheduled to consider his nomination in a hearing that had previously been delayed five times.

Puzder, the CEO of the fast-food conglomerate that owns the burger chains Hardee’s and Carl’s Jr., has been under attack by Democrats and outside groups for weeks for admitting he hired an illegal immigrant as a housekeeper and allegations that he abused his ex-wife and treated employees poorly.

Fox News has learned that President Trump’s pick for labor secretary, Andy Puzder, is expected to withdraw his nomination. 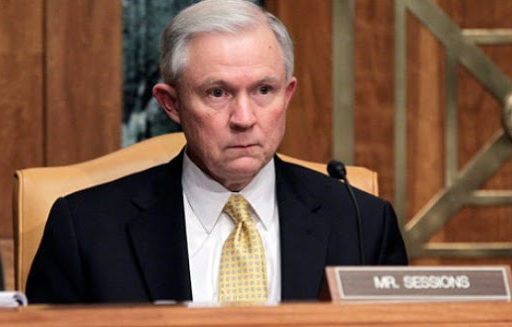 Donald Trump’s cabinet nominees are moving forward through Senate committees today, albeit in a rougher fashion than seen in earlier confirmations.

• Attorney General nominee Sen. Jeff Sessions was approved this morning on an 11-9 party vote in the Senate Judiciary committee.

The unanimous opposition by committee Democrats seems to signal a lack of trust in Sessions’ ability to apply federal laws uniformly, and concerns about his uneven background on civil rights.

• Senate Finance Committee chairman Sen. Orrin Hatch decided to suspend the committee rules which require the presence of at least one Democrat in order to allow a vote. In doing so, Trump’s nominees Steven Mnuchin (Treasury Secretary) and Rep. Tom Price (Health Secretary) advanced to the Senate floor for a vote by the full Senate.

Senate Democrats had boycotted Mnuchin and Price’s hearings Tuesday saying Price “outright lied to our committee.” Sen. Sherrod Brown (D-Ohio) pointed to a report that indicated Price had received an offer to buy a biomedical stock at a discount, directly contradicting earlier testimony in his confirmation hearing. 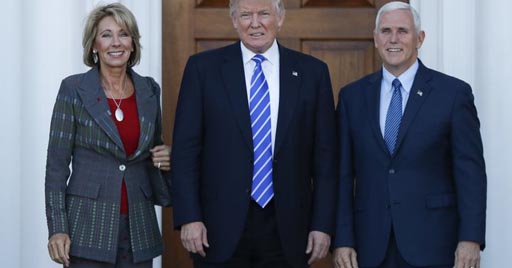 Donald Trump has announced his choice for Secretary of Education and it’s anti-gay marriage, Amway billionaire Betsy DeVos of Michigan.

In addition to the Amway fortune, the DeVos family also owns the Orlando Magic.

She becomes the second woman to join Donald Trump’s cabinet.

DeVos, a former Michigan Republican Party chairwoman, is well known for her support for charter schools and vouchers.

She and her husband, Dick DeVos, are mega-donors to the Michigan Republican party and well-known for their generous donations to GOP officials and candidates.

In 2012, ABC News ran a story on the DeVos which included the fact that they donated $500,000 to the virulently anti-LGBT organization, the National Organization for Marriage (NOM).

In other words, they REALLY don’t like the gays.

In response to that donation, LGBT activists called for a boycott of health and beauty company Amway, which is owned by DeVos’ father.

GLSEN issued this statement regarding the news:

“We are deeply concerned by the nomination of Betsy DeVos for U.S. Secretary of Education. GLSEN is committed to the principle that all students have a right to high-quality public education free from discrimination. DeVos’s record of advocacy for vouchers and tuition tax credits represents a rejection of that principle. We have seen time and time again that so-called “school choice” undercuts civil-rights enforcement and drains public education systems of desperately needed funds. True educational equity requires schools that serve the most at-risk students, including students of color; students with disabilities; lesbian, gay, bisexual, transgender, queer and/or questioning (LGBTQ) students; and English-language learners. Vouchers and tuition tax credits do not advance this cause.

“As we have seen over the past eight years, federal civil rights oversight of education is essential to ensure that all students in this country have real access to opportunity. There is so much to be celebrated in the civil rights gains made during the Obama Administration. As a nation, we must build on that legacy. Over the years, people of good will across the political spectrum have been able to come together to promote the success of all students, and we call upon DeVos to join us in moving forward.”

And this from the National Education Association, the country’s largest education labor union with 3 million members:

Every day, educators use their voice to advocate for every student to reach his or her full potential. We believe that the chance for the success of a child should not depend on winning a charter lottery, being accepted by a private school, or living in the right ZIP code. We have, and will continue, to fight for all students to have a great public school in their community and the opportunity to succeed no matter their backgrounds or circumstances.

Betsy DeVos has consistently worked against these values, and her efforts over the years have done more to undermine public education than support students. She has lobbied for failed schemes, like vouchers — which take away funding and local control from our public schools — to fund private schools at taxpayers’ expense. These schemes do nothing to help our most-vulnerable students while they ignore or exacerbate glaring opportunity gaps. She has consistently pushed a corporate agenda to privatize, de-professionalize and impose cookie-cutter solutions to public education. By nominating Betsy DeVos, the Trump administration has demonstrated just how out of touch it is with what works best for students, parents, educators and communities.

But remember, Trump is going to be a “good friend” to the LGBT community.