In his ever brilliant way, Stephen Colbert explains the science behind how the gays created Hurricane Issac to ruin the GOP National Convention.

Michael Leisner has really made it!

After his “protest gone wrong” video (where he set fire to the front lawn of pro-equality company General Mills) went viral, Michael Leisner has now found himself featured on Comedy Central’s Colbert Report.

p.s. his over-dramatic, ill-conceived and illegal action led to his being fired by his real estate office.

Stopping by The Colbert Report to discuss hosting The Tony Awards for the third time, Neil Patrick Harris is comedy gold with Stephen Colbert. I literally laughed out loud. Enjoy…

Rick Santorum recently “read something out of California” that indicated how bad colleges there have gotten. They don’t even teach American history anymore, Santorum asserted.

“That is an outrage,” Stephen Colbert said on Tuesday. “The only thing that would be more outrageous is if this were true.”

Well, it’s not. Public colleges in California do offer degrees in American history. Well, the University of California in San Francisco doesn’t — but it happens to be a medical school. Santorum just pulled that fact out of his … heart, Colbert said.

“I certainly hope that when Santorum moves on to the California primary June 5, he does not get an intestinal blockage,” Colbert added. “Because I don’t think the doctors out there are as qualified as Santorum to pull things out of his ass.” Reuters: Comedy Central has suspended production of the Colbert Report for at least two days, an unexplained development that ignited widespread speculation about the popular satirical news show on Twitter and other social networks.

Comedy Central said the show aired a repeat episode on Wednesday and would again on Thursday due to “unforeseen circumstances,” but did not elaborate. A spokesman for the cable network, owned by Viacom Inc., was not immediately available to comment.

UPDATE: Production on The Colbert Report was shut down on Wednesday due to an emergency with Stephen Colbert’s family, according to the Wall Street Journal’s Speakeasy blog. Comedy Central expects the show to resume production next week. 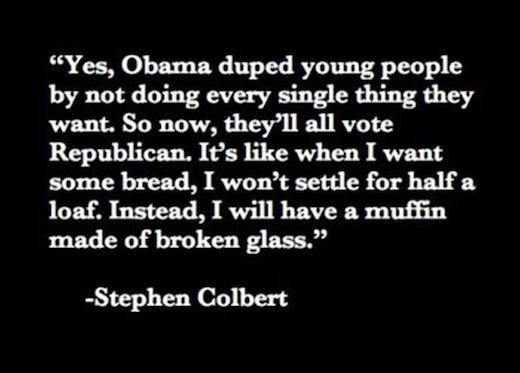 On Monday’s “Colbert Report,” Stephen Colbert attempted to prove that it was possible to ride a horse while ringing a bell and firing and reloading a musket by jumping on his coin-operated kiddie horse and taking a very bumpy ride.