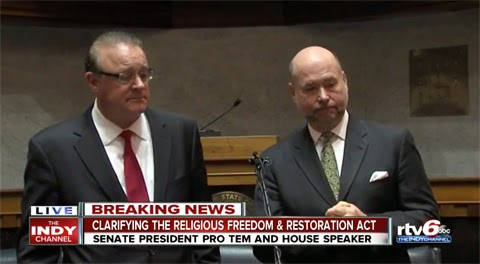 I know I’ve been writing a lot about the debacle in Indiana regarding the passage of SB101 – the so-called “Religious Freedom Restoration Act.”

As an interested party, it’s fascinating to see how government will/will not or can/cannot react to situations like this.

That sounds good. At first.  But all indications seem to be that they aren’t really proposing any real changes to the anti-gay legislation. The word “clarify” is all they seem to come up with here.

Don’t let the 30 minute time length intimidate you. Just watch the first two minutes. Really incredible to see the two lawmakers scramble to try and get this under control.

It’s of interest to me that they pretend that they didn’t see this backlash coming. At one point, one of the two says that they never heard strong objections over the bill during it’s passage. And yet, I know voices were raised.

Perhaps they thought it would just be a couple of LGBT advocacy groups and some bloggers? Wrong.

Trust and believe they knew EXACTLY what this law was and is. They knew it was born of anti-gay animus.

Over and over they proclaim the law does not discriminate; that it’s a “mischaracterization” and a “misconception” about the law.

Asked if they would consider adding sexual orientation to the state’s protected classes, they rear back saying that would be too difficult for now. 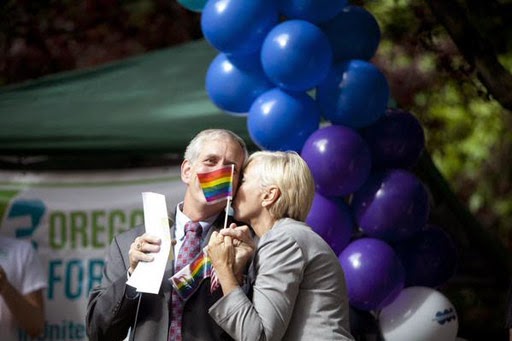 Portland Mayor Charlie Hales follows other mayors across the country in suspending city-funded travel to the state of Indiana.

“Gov. Mike Pence and the Indiana Legislature have to understand that such blatant discrimination against their own citizens cannot stand. We, as a country, have moved so far from those shameful practices of the past,” Hales said.

“It is regrettable that the great city of Indianapolis, led by its very effective mayor, Greg Ballard, is being dragged down by the reactionary efforts of the State Legislature and the governor.”

“Indiana isn’t the first state to adopt this backward, discriminatory policy, but most states have sexual-orientation language in their civil rights statutes to protect LGBT residents,” Hales said.

“Indiana doesn’t offer these same protections. All states have to realize that government-sponsored discrimination against LGBT residents in the United States of America has to stop.” 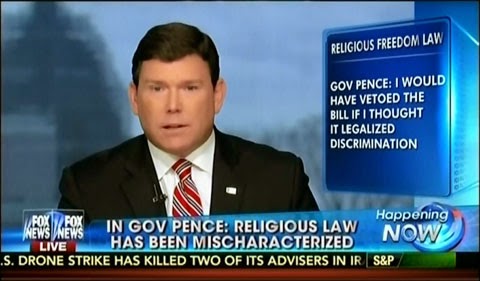 When even Fox News anchors can see a law doesn’t work, you know the jig is up.

Bret Baier, appearing on Happening Now today, told host Eric Shawn that the law is NOT like the federal version, and that it will “have to be tweaked, if not changed.”

Check this transcript from the segment:

ERIC SHAWN: You know, the law was intended to protect personal religious liberties against government overreach and intrusion. So what happened?

BAIER: Well, Indiana’s law is written a little differently. It is more broad. It is different than the federal law that it’s close to, but different than, and also different than 19 other states and how the law is written. In specific terms, Indiana’s law deals with a person who can claim religious persecution but that includes corporations, for profit entities and it could also be used as a defense in a civil suit that does not involve the government. That is broader than the other laws. This is where it’s a little different in Indiana’s case. You saw governor Mike Pence try to defend the law and say it’s just like the 1993 federal law where it’s just like 19 other states, but as you look in the fine print, it’s not really, and it may be something that Indiana deals with in specifics to line up with the others.

SHAWN: Obviously, it had good intentions. What do you think happened to make it kind of go off the rails this way?

BAIER: Well, how it was structured, Eric. And I think that, you know, there may be good intentions behind it but how it’s being interpreted is being a little bit more forward leaning than any other Religious Freedom Restoration Act on the books. What this does politically, obviously Mike Pence has been talked about as a governor thinking about a 2016 run. We don’t know if he’s going to do it or not. But that interview with Stephanopoulos over the weekend was obviously not a great back and forth in defense of this law that likely is going to have to be at least tweaked, if not changed. [emphasis added]

Further discussions about SB101 continue to circle back to the federal law with conservative Hoosier lawmakers saying their law is “exactly” like.

But as Bret Baier and many others can now attest to upon closer evaluation, there is a major difference between Indiana’s version of the law and the federal government’s version.

Indiana’s RFRA is categorically different from other “religious freedom” laws, because it includes for-profit businesses under its definition of “persons” capable of religious expression.

The Indiana law also allows private individuals and businesses to claim a religious exemption in court “regardless of whether the state or any other governmental entity is a party to the proceeding.”

Those differences — which the ACLU has called “virtually without precedent” — expand the scope of Indiana’s RFRA and provide a legal defense for businesses and individuals who refuse service to LGBT residents.

First, San Francisco’s mayor issued a ban on city-funded travel to the state of Indiana over the recently passed (and highly controversial) “license to discriminate” legislation SB101.

Today, the governor of Connecticut has now issued his own executive order banning state-funded travel to the Hoosier state.

And, unlike other states Connecticut doesn’t permit discrimination on sexual orientation in any private establishment or institution. 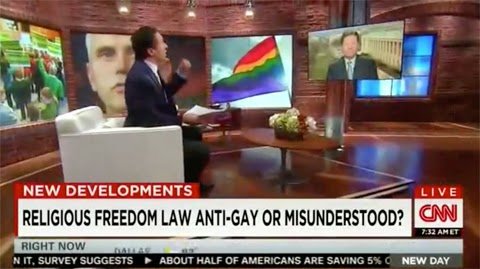 “There is a picture that’s circulating around of the governor as he signed [the bill],” Cuomo said. “Several of the people in the picture are outspoken critics of gay existence. Now, that’s not a coincidence. It’s not a coincidence why you’re against it. Let me ask you, why do so many Christians these days believe that the exercise of their faith requires exclusion and judgment of others?”

“Some people have a sincere, conscientious belief that marriage is defined as the union between a man and a woman,” Sprigg replied. “In fact the majority of Americans believe that.”

“Popularity is not the ultimate arbiter of what is right and wrong if protecting rights under the Constitution,” Cuomo said. “The question then goes to: why do you need this? What is it about someone being gay or someone wanting to marry someone of the same sex — what is there in that that is keeping you from being the Christian you want to be?…If I said, Mr. Sprigg, you must go marry a man right now, you can say, no, that’s a violation of my faith. Maybe that, you would be able clear this burden. But how is wanting to judge others somehow stopping you from practicing your faith?”

The upshot? We’re not crazy here, kids. Everyone sees this. The haters just don’t want to say it out loud. 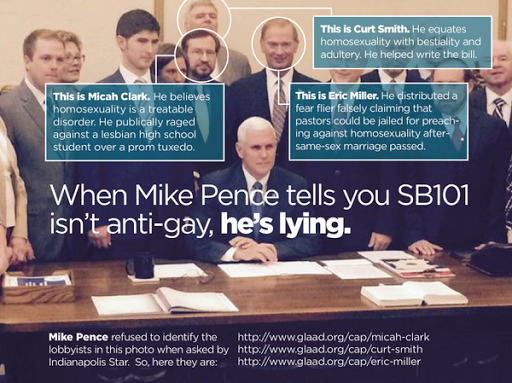 Life is funny. Folks may think they can hate, and then get away without being identified.

It’s cool guys. If you wanna hate, go for it. My only request – be proud of what you stand for. 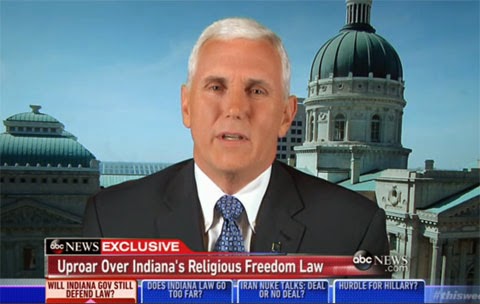 Indiana Gov. Mike Pence made a disasterous appearance on ABC News’ This Week with George Stephanopoulos to “clarify” his state’s new bill which has been called a “license to discriminate” against LGBT folks.

It’s almost painful to watch as George repeatedly asks for a yes or no answer to the question: does this new law make it legal for a florist to refuse to serve a gay couple? At least three times, Pence pivoted away from the question and refused to address it.

George asked if adding LGBT folks to the state’s civil rights protected classes might be an avenue the state could take to “prove” the law isn’t about discriminating against gays? Pence said that wasn’t on his agenda.

Finally, at the 9:52 mark, George asks flat-out (easy answer here, kids): “Governor, do you think it should be legal to discriminate against gays and lesbians in Indiana?”

Pence takes a long pause – that was where he should have said “No, of course not!” – and pivoted away from the question one last time.

This appearance didn’t help his cause in any way. Watch the supercut of his appearance showing the 8 times he refused to say whether the law discriminated against gays and lesbians. You can watch the full interview here. 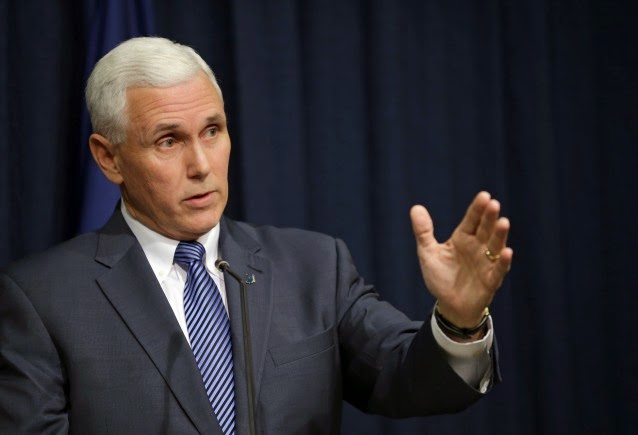 After a week of scorching backlash over the passage of Indiana’s “license to discriminate” law – SB101 – Gov Mike Pence has announced he intends to file new legislation to “clarify” the controversial Religious Freedom Restoration Act.

Pence says he didn’t anticipate the “hostility” that has been leveled at the state over the anti-gay legislation. He declined to provide details about the upcoming “clarification” but said that making LGBT Indiana residents a protected legal class is “not on my agenda.”

Pence said repeatedly that the intense blowback against the new law is the result of a “misunderstanding driven by misinformation,” and disputes the law allows state-sanctioned anti-LGBT discrimination.

Freedom Indiana finds Pence’s response a bit on the disingenuous side, as campaign manager Katie Blair issued the following statement:

“You can’t ‘clarify’ discrimination. Indiana now has billions of dollars and thousands of jobs on the line, all because the Governor wouldn’t stop this dangerous bill. He has a second chance to save our reputation for Hoosier hospitality, but he has to stand up and protect LGBT Hoosiers.

“Discrimination is not a core Hoosier value, and we can’t afford to let our state continue to suffer. Please, Governor, listen to the voices of common sense and reason trying to get through to you. Fix the bill to protect all Hoosiers, and make it clear our state is open for business again.”

.@GovPenceIN If IN truly doesn’t discriminate, prove it. Protect your LGBT citizens truly at risk like other states do. @JohnRussell99
— Chad Griffin (@ChadHGriffin) March 29, 2015

And Lambda Legal offered this bit of free advice:

.@GovPenceIN if you really meant Indy’s #RFRA isn’t about discrimination, it can easily be fixed in 2 steps by adding this language:
— Lambda Legal (@LambdaLegal) March 29, 2015

And include gay and transgender people within Indiana’s protections for discrimination.
— Lambda Legal (@LambdaLegal) March 29, 2015 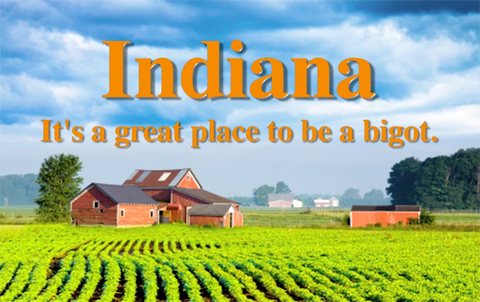 And so, it begins…

I always wondered what it must feel like to get what you want. 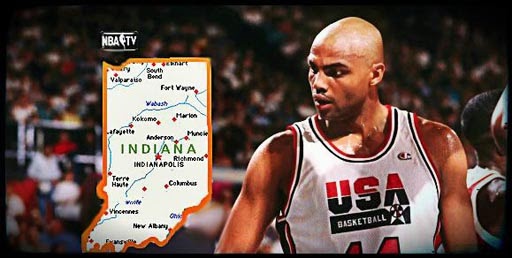 The newly enacted law “prohibits state or local governments from substantially burdening a person’s ability to exercise their religion,” according to The Indianapolis Star.

In essence, the law gives businesses a legal foundation to refuse service to LGBT individuals in the name of religious freedom.

“Discrimination in any form is unacceptable to me,” Barkley said in a statement Friday afternoon. “As long as anti-gay legislation exists in any state, I strongly believe big events such as the Final Four and Super Bowl should not be held in those states’ cities.”

In addition, another former NBA star – Reggie Miller – tweeted his disappointment over “legalized” discrimination in his adopted home state.