First Lady Michelle Obama announces the launch of “It Takes One”.

“It Takes One” is a new effort that asks you to inspire one more person to join you every time you take an action to move this country forward. If you’re making phone calls or knocking on doors, take a friend along. If you’re registering to vote, make sure that a family member is registered as well. If you’re attending an event, bring one neighbor along. And if you’re voting early on election day, bring one new voter with you. You could inspire five, or ten, or 100 new people before November.

As the First Lady shares:

In a video posted online by the White House Thursday night, the first lady answered questions submitted via Twitter.

One question said, “Please tell us about your family discussions about marriage equality and thank President Obama for his support.”

Michelle Obama responded, “For Barack and me, it really comes down to the values of fairness and equality that we want to pass down to our girls. I mean, these are basic values that kids learn at a very young age and that we encourage them to apply in all areas of their lives. And in a country where we teach our children that everyone is equal under the law, discriminating against same-sex couples just isn’t right. So it’s as simple as that. We’re proud to have your support.” 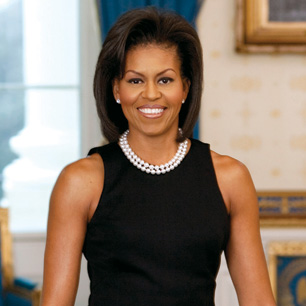 First Lady Michelle Obama, campaigning for her husband at two fundraisers in New York City, said Monday that his Supreme Court picks will impact whether people can “love whomever we choose.”

The First Lady campaigned for her husband Monday in New York City. At a TriBeCa fundraiser, Mrs. Obama stressed the importance of the next four years on the Supreme Court: “Let us not forget what [the Supreme Court’s] decisions — the impact those decisions will have on our lives for decades to come — on our privacy and security, on whether we can speak freely, worship openly, and, yes, love whomever we choose.”

The First Lady made a similar statement at a fundraiser earlier in the day in Chelsea: “Let’s not forget the impact [the Supreme Court’s] decisions will have on our children’s lives for decades to come — on their privacy and security; on whether they can speak freely, worship openly, and love whomever they choose.”

The First Lady’s communications director is Kristina Schake, a founding board member of the American Foundation for Equal Rights.

Ms.Schake explained: “That line in the First Lady’s remarks has been in her campaign speeches since last summer and refers to the importance of the Supreme Court for deciding many issues. The President and First Lady firmly believe that gay and lesbian Americans and their families deserve legal protections and the ability to thrive just like any other family,” she said. “The First Lady has said she is proud of the President’s accomplishments for gay and lesbian Americans on a range of issues, including repealing Don’t Ask, Don’t Tell, ensuring hospital visitation rights and calling for the repeal of DOMA. “

Gasp – yes, I know. I believe we should spend within our means as individuals. But I also believe there are people who need help. And there is a responsibility of society to help.  Not support – but help.  I hate this “I take care of myself, you take care of you” thing.

I believe we can raise the retirement age one or two years (for kids under 50 today) and we can help Social Security. Nope, that doesn’t bother me.

I think we could raise the cutoff level for contributing to Social Security a bit and it wouldn’t hurt all that much.

For those people – mostly Tea Party and conservatives I’ll notice – who say “I don’t need to take care of anyone else, and no one needs to take care of me” I say fine. But along with that, since I have no children, can I stop paying for public schools? That’s my money you know. I didn’t choose to have children. Why should I pay for someone else’s result of whoopie? But I do. It’s the way it works. Society helps further society.

What DOES bother me lately is the fact that some people have lost the respect we used to have for public figures like the First Lady. This bothers me. It irritates my a**hole.  You betcha.

Sarah Palin has taken to finding reasons to get snarky with the First Lady every chance she can. First, because the First Lady dared to say we should encourage kids having healthy options to eat at schools. And then she criticized Michelle for supporting breast feeding.  Good lord!  The nerve!

This is what Sarah Palin said to that: “What she is telling us is she cannot trust parents to make decisions for their own children, for their own families in what we should eat. And I know I’m going to be again criticized for bringing this up, but instead of a government thinking that they need to take over and make decisions for us according to some politician or politician’s wife priorities, just leave us alone, get off our back, and allow us as individuals to exercise our own God-given rights to make our own decisions and then our country gets back on the right track.”

Here are the facts:

• One-third of young people in the United States are overweight or obese, and one-third will suffer from diabetes at some point in their lives.

• Over the past three decades, childhood obesity rates in America have tripled.

• A Department of Defense report notes the military must recruit about 15 percent of youth. About one-fourth are obese, making them medically ineligible. In 1980, by comparison, just 5 percent of youth were obese.

Michelle Obama has chosen to stand up for “smart, strategic efforts to help our kids lead active, healthy lives right from the beginning.” By starting young and staying firm, she hopes to slow the impact of the killer diet that threatens all Americans.

I don’t recall people attacking Lady Bird Johnson for her efforts to beautify America. I don’t recall anyone attacking Laura Bush for encouraging reading and education. Where was Sarah Palin complaining that Laura Bush should have “gotten off her back” about encouraging her kids to read? Have we ever heard Palin complain that Nancy Reagan stood on her platform of “just say No to drugs”? Why doesn’t Palin say “geez – I can teach my kids about drugs on my own – why don’t you get off my back?”

No, you don’t hear that because it didn’t promote Sarah Palin’s agenda. She needs to attack – but only if it’s a Democrat.

I never spoke out against Laura Bush, Barbara Bush or any First Lady. I applaud these women finding a cause that helps encourage the public good. Not dictate – encourage. Sarah Palin has clearly never met a Democrat she ever liked.

And by the way Ms. Palin – if you’re going to Facebook and Twitter everything you think, can you at least bring something to the table in the form of a positive solution?  No one likes a bitter Monday morning quarter-back.  It seems all we get from the reality TV star is snark.  How about contributing something that moves us all forward in a positive way?

I guess I just wish if people want to attack the President – who campaigned for his job – do your thing. Free speech and all that.

But I really wish we had the class and courtesy to not attack any First Lady for trying to do a little good with the small platform they choose.

And by the way – since I’m paying for the school taxes in my area – can we ask some of these kids to eat a bit healthier, and send them out to run around in the fresh air?  If I’m paying, I figure I should have a say.

Or send me a tax refund.