Good As You notes:

“It’s just an army man, Paul, and his love, David, in a non-church setting, entering into a *civil* marriage contract in the state of Iowa.  This is what we equal rights activists are fighting to achieve in all states and federally, even as our opposition continues to throw religious asides our way.”

I think this is beautiful. Reminds me very much of how Michael and I got married.

Great, fabulous day in my life. I wish Paul and David the very best. Congratulations. 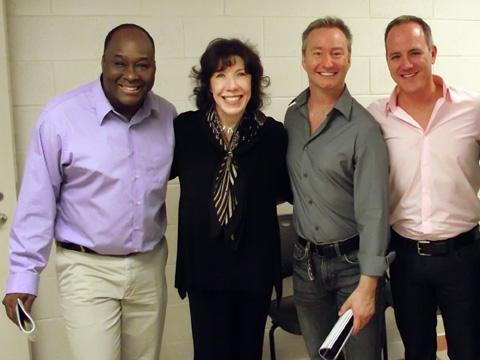 So, Sunday I had the chance to enjoy the brilliant comedy of Lily Tomlin at the beautiful new Smith Center in Las Vegas as a guest of my friend Kirk Weber, who has known Lily for years.

This was my first trip to the Smith Center since it opened. Not only is it beautiful but it was packed for the Mother’s Day performance by the ever insightful and hilarious Lily Tomlin.

How do you even begin to write about a talent this sharp, this astute, this observant of the human condition?  Ms. Tomlin gave us a few glimpses of her iconic characters like “Edith Ann” and “Ernestine” but also didn’t shy away from topical issues like President Obama’s support for gay marriage.

It was interesting to sit in an audience that was clearly split on the subject and not prepared when she brought up the subject of marriage equality: “I’m really ambivalent on the idea of gay marriage – I mean, once you start with gay marriage where do you do next?  Monster truck rallies?  It’s such a slippery slope…  And while I applaud the President’s courage to embrace gay marriage, it may cost him votes.  Although, on one hand you have the President – who’s a human being…”   And from there she just let the audience fill in the gap.

It was really fun watching a comedic genius at work.  Her pace, her body language, even the cut of her eyes told you volumes of where we were going next.

Many people are so comfortable with Ms. Tomlin’s expertise at her own comedy some may have forgotten that she was nominated for an Academy Award for her work in the film “Nashville” in addition to all the other awards (Grammy, Emmy, Tony, NY Film Critics) she has won.

Backstage I was able to catch up to her briefly before she had to catch a flight out.  She did mention that she mention that we will be seeing more of her this fall as she will be starring in a new ABC TV series that was just picked up – “Malibu Country” co-starring Reba McEntire.

Just Saturday night Reba tweeted “Okay, for those of you who do not know what “Malibu Country” is, it’s a new sit-com on ABC that I get to act in along with Lily Tomlin!!!”

On ‘Malibu Country,’ Tomlin will star as the mother of Reba’s character, who will be a Nashville mom who abandoned by her musician husband. He takes most of their money, which forces her to relocate to Malibu, Calif. to try and relaunch her career as a singer. Professional aspirations aside, she also has to deal with her responsibilities as a mother, keeping her three kids on the up and up in a new and foreign environment which is more materialistic than they are used to.

From the ABC website: “Her life reads like a country music tune: Her husband cheated on her and
spent all of their money, and after she gets mad, she’s going to get
even. From country music superstar/executive producer Reba McEntire and
executive producer Kevin Abbott (Last Man Standing, My Name Is Earl, Reba) comes a hilarious new comedy about new beginnings that will make your heart sing.”

Look for it this fall. 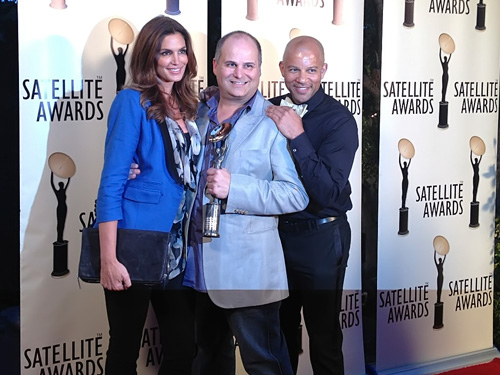 What a terrific event.  Brian Edwards was honored for his work in client relations at the International Press Academy’s Satellite Awards event last night.

The award presentation included video greetings from Joan Rivers, Whoopi Goldberg, Ali Landry and many others.

I had a great time catching up with Vanessa, especially about Broadway theater – comparing notes of what we’ve seen so far, friends being nominated for awards, and what we still want to make sure we see. Once you’ve lived in the theater, it’s in your blood. There’s just no losing that passion.

Vanessa also sang an impromptu a cappella version of “Happy Days Are Here Again” in honor of Brian that was amazing.  What a voice.  She sounded great.

Check out the pics below: 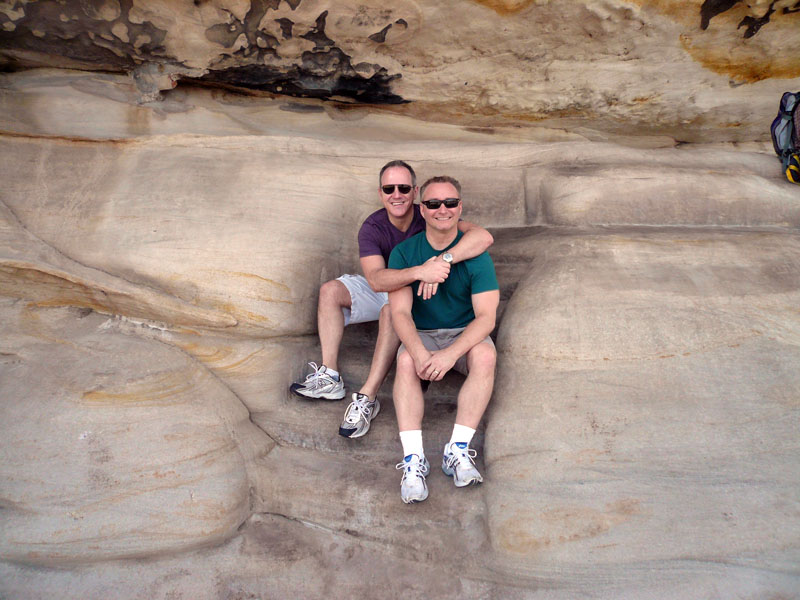 First day in Sydney, Australia, and we had fantastic summer weather. So we HAD to get the famous, iconic, tourist pics done just in case the weather turned.

By the way, click on a pic to see a larger view.

Some more fun Sydney pics coming up too. Thanks for indulging me the “tourist pic” thing 🙂 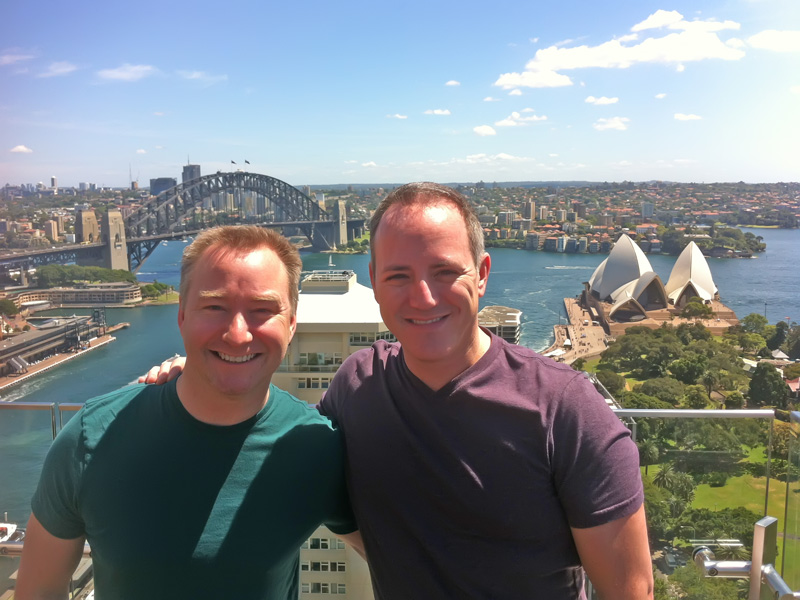 The first day ‘down under’ started with breakfast on top of our hotel over looking the Harbor Bridge and the iconic Sydney Opera House!  We then walked all around the Botanic Gardens surrounding the entire area.

I asked Olivia if Michael could be a “T-Bird” during ‘Summer Nights’ at the Atlantic City concert 12/9/11 for his birthday. The video starts as Olivia’s music director Andy Timmons got Michael all geared up to be a ‘greaser.’

So glad his parents were in the house to see this. Michael was a little numb from the shock of this all happening. 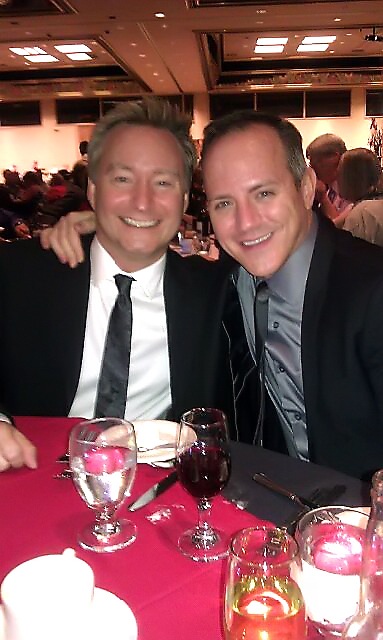 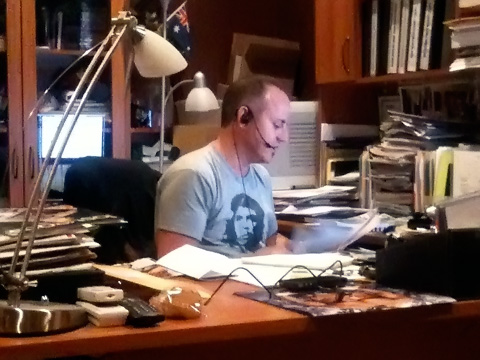 Tonight at the Riviera Hotel, my husband Michael Caprio will be honored with others in our community for the support and service he volunteers to this amazing organization.

I’m very proud of Michael. He’s one of the hardest working people I know, but never so busy to not help promote the St. Therese Center’s work and mission. Throughout the year, and indeed for many years, he spends many hours promoting and getting the word out about the Center’s many events.  He also has been instrumental in getting others, like Broadway’s Brent Barrett and the Chippendales among others, to participate and donate their time and energy to this great charity.

The St. Therese Center, named after Saint Therese of Lisieux, is a Catholic ministry that welcomes and serves people of all faiths and extends the Lord’s healing to all persons infected and affected by HIV/AIDS.

Emphasizing wellness, Saint Therese Center reaches out to those touched by HIV/AIDS to provide spiritual, physical and emotional support, educational and social services in the spirit of love and compassion.

If you have time tonight, come to the Riviera Hotel on the Strip, donate to the gala dinner and find out more about this terrific organization. Drinks are at 6PM, dinner around 7PM.

Click here for more info about the Saint Therese Center.

UPDATE: Thank you for everyone who came out to support the St. Therese Center and celebrate Michael being honored for his contributions.  Especially Gordon Miles, Alex Chavez, John Genovese, Joey Gonnello, Ben Lemke, and Chris Saldana.  Much fun was had at the table, and it was a great night for the St. Therese Center. 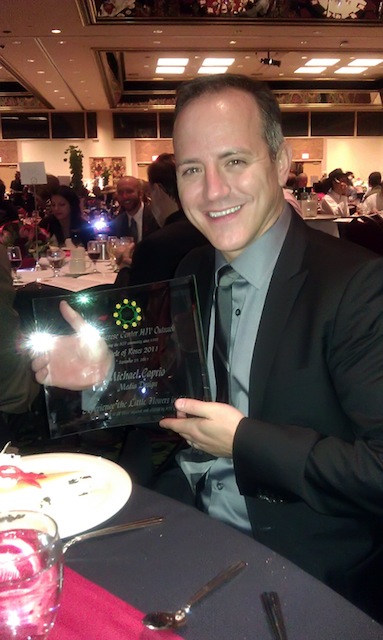