• Reuters: Thousands of religious and right-wing activists protested on Sunday calling for authorities to ban a Pride event in Serbia planned for next weekend. END_OF_DOCUMENT_TOKEN_TO_BE_REPLACED 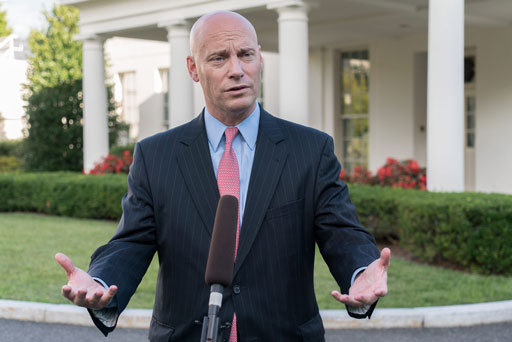 It’s common knowledge that Vice President Mike Pence has been no friend to the gay community.

A short list of attacks against LGBTQ folks while in Congress includes voting against marriage equality, opposing transgender rights, and opposing the repeal of ‘Don’t Ask, Don’t Tell.’

While governor of Indiana, he signed the Religious Freedom Restoration Act into law making it possible for businesses to discriminate against the LGBTQ community, suggested shifting federal funds meant for AIDS research to programs that would “provide assistance to those seeking to change their sexual behavior” and more.

So it shouldn’t surprise anyone that Pence’s incoming chief of staff, Marc Short, penned an op-ed while in college that called homosexuals “perverted” and “repugnant.”

As the saying goes, ‘birds of a feather flock together.’

According to The Daily Beast, the essay appeared in The Spectator, a conservative student newspaper for Washington & Lee University that Short co-founded.

In the article, which appeared in 1989, Short wrote that AIDS activists efforts in the 1990s were a “propaganda campaign” that was meant to “scare all heterosexuals into believing they are prime targets for contraction of the disease.”

“The campaign’s purpose,” alleged Short, was to “both lobby Congress for more federal funding of AIDS research and to destigmatize the perverted lifestyles homosexuals pursue.”

He even went so far as to claim the LGBTQ community “celebrated” the news of NBA superstar Magic Johnson’s HIV diagnosis because it “refueled the propaganda campaign ignited by gay activists and carelessly perpetuated by journalists whose intent is to scare all heterosexuals into believing they are prime targets for contraction of the disease.”

When contacted by The Daily Beast about the op-ed, Short issued a statement, which read, “I regret using language as an undergraduate college student that was not reflective of the respect I try to show others today. We have all learned a lot about AIDS over the past 30 years and my heart goes out to all victims of this terrible disease.”

“I wrote stuff in college too,” Staley told The Daily Beast. “And I don’t look back and say, ‘Oh, sorry, it was my college years.’ You’re either on the right side of stuff or the wrong side.”

“He was taking classic Jesse Helms-style rhetoric from the late ’80s and putting an early ’90s spin on it and sounding like the fools they all were,” added Staley. “Guys like him wanted us to die. And they had an effect.”

The article surfaces as the public debate about past behavior and statements of Washington power players while in college continues to grow, like the recent scandals regarding Democratic leadership in Virginia involving dressing up in black face.

The Daily Beast reports that Pence’s office did not issue a statement regarding the essay.

It’s awful that @VP would hire someone who has such disdain for gay people and those living with HIV and AIDS, but it’s sadly not surprising given Pence’s own record on these issues. https://t.co/E33GxKK30g