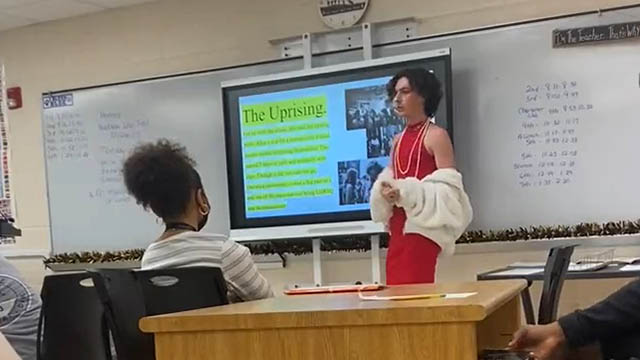 Will Larkins, a gay and nonbinary junior in Winter Park, Florida,  has gone viral  teaching their U.S. history class about the 1969 Stonewall uprising in spite of the state’s anti-LGBTQ “Don’t Say Gay” law. END_OF_DOCUMENT_TOKEN_TO_BE_REPLACED

Elya Shchemur, an LGBTQ rights activist from Kharkiv, died due to injuries incurred during Russian bombing of the city center. Her colleagues at Kharkiv Pride said she was killed while volunteering at the local defense office. END_OF_DOCUMENT_TOKEN_TO_BE_REPLACED

From Alphonso David, President of the Human Rights Campaign:

After four long years, we can finally celebrate — our voices were loud and clear, and together, we have elected Joe Biden and Kamala Harris to the White House, by more than four million votes and counting! Their election proves once again that equality is a winning issue, and reflects both the incredible work of this organization and the strength of our shared unity.

Voters across the country turned out in record numbers to make their voices heard! And we came together with a message: #UnityWins. We can't wait to see @JoeBiden and @KamalaHarris in the White House. #ElectionResults2020 pic.twitter.com/2oCoav49QH

The results of this presidential election affirm that every vote and every voter counts. LGBTQ people and all marginalized Americans came together to make this victory possible, and now the journey to safety, equality and acceptance can continue forward.

President-elect Biden and Vice President-elect Harris have promised to fight for America as a place where we all can belong and succeed, where truth and kindness matter. In the early days of their administration, they must prioritize protecting LGBTQ people equally under the law in a country where we can live without fear. We must all also confront the racism and bias that fueled the division of the last four years, and resolve to come together for justice and equality for all. We are eager to act on this historic vote for progress and get our country back on track.

Today, I breathed a sigh of relief for the first time in years, even as we know that we have hard work ahead of us. My hope is that after four years of white supremacist policies, actions and rhetoric aimed at the worst impulses of those who see LGBTQ+ people, immigrants, people of color, people with disabilities, and so many as the ‘other’ as targets for discrimination and prejudice, we have elected national leaders who have vowed to see and fight for the humanity in all of us.

I am filled with hope because our children will again live in a nation led by an administration that sees their potential, their resilience, and their diversity as strengths. I am filled with hope because for the first time in history a woman will serve as Vice President of the United States of America. After more than 100 years of women of color being cut out of the protections gained by the constitutional amendment granting mostly white women the right to vote, a woman of color will be bringing her expertise, experience and vision to lead this nation.

The will of the people is clear: voters have chosen Joe Biden and Kamala Harris to move us forward together towards a better future. This has been a long, difficult election unlike any we have witnessed before. But the story of the election is this: Despite all of the obstacles, we voted in enormous numbers for democracy, for justice, for equality, and for each other.

The will of the people is clear: voters have chosen Joe Biden and Kamala Harris to move us forward together towards a better future. pic.twitter.com/Ie0TyZp3td

President-Elect Joe Biden has long been a champion of our community and he has promised the most LGBTQ-inclusive administration that has ever been in the White House. The opportunity to partner with a friendly administration and rebuild has never been greater.

And additionally noteworthy, Kamala Harris not only represents the first woman ever with the title Vice President-Elect, but also the first Black woman and South Asian woman to hold the position, which will provide a perspective that we have never had in that role before.