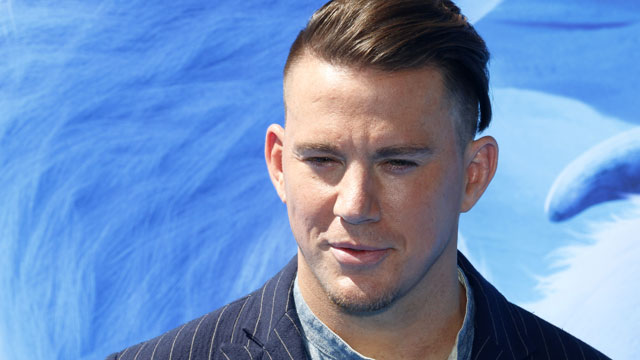 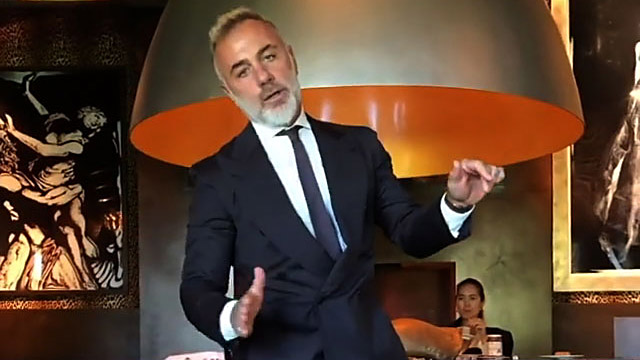 This past Saturday, a Facebook user shared a clip of this silver-haired daddy throwing down some serious moves. Accompanying the video was the simple question, “Who’s father is this? I’m trynna make him my daddy.”

Well, you know someone was going to come up with the pertinent details 🙂

Turns out his name is Gianluca Vacchi, 52, and the video is from his own Instagram where he has 14 million followers. Vacchi posted the clip six days ago, and so far has racked up over 4.4 million views.

Take a look and you’ll see why we’re having Daddy Gianluca:

It’s not only about the way you dress, but what you do in it (and without)….😉 Lo importante no es Como te vistes sino lo que haces vestido (o desvestido) 😉 Enjoy… @1000virtudes @sharfonseca #nfasis #gvlifestyle

Vacchi has been described as an “entrepreneur,” “a multi-millionaire,” even a “hedonism-loving playboy” according to GQ Magazine UK.

The Evening Standard named Vacchi as the 4th most influential fashion Instagram celeb, and he reported commands over $16k for a single post.

Back in 2014, Vacchi was discovered dancing with hottie Zac Efron in some Instagram posts shared from Italy.

He takes a good pic, too. Take a look at some more from the oh-so-woofy Vacchi. 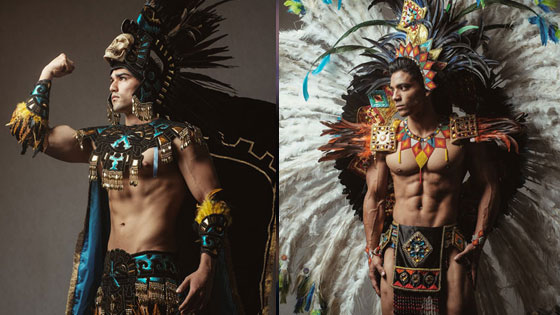 It’s Hump Day and you know what makes getting to the end of the week just a little easier?

Launched in 2014, Mister Global is a male pageant that promotes environmental awareness.

The 2019 edition, recently held in Bangkok on September 26, chose ‘Inspiring Gentleman’ as its theme.

Kitti Kamjunsa, a spokesperson for the pageant, told BoredPanda the theme was chosen because “We believe that the contestants and titleholders should motivate and inspire people.”

This year’s pageant raised funds for an organization that takes care of elephants in Thailand, which was the host country for 2019.

Mister Global names its Top 16 contestants, and this year it was Korea’s Jong Woo Kim that came out on top. Tunisia’s Houssem Saïdi snatched the second place crown, and Spain’s Jose Luis Rodrigo came in third.

Check out the swimsuit competition below. I notice Mr. USA kinda has some attitude when he walks out. Later in the clip, you see the Top 16 do solo walks, and he’s not one of them, so…there you go.

One category that receives a lot of attention is the National Costume Show that allows contestants to showcase and celebrate clothing that represents their country.

Some of the costumes are extremely ornate and sophisticated designs that spotlight the country’s heritage, some utilize the colors and design of a country’s flag, and some (to be honest) are meant to go viral on social media.

Each of the 38 contestants was captured by photographer David Ryo, and there’s definitely something for everyone.

Some of the costumes were stunning, some were a little…surprising?

We’re looking at you, Mr. Sweden and Mr. USA.

Here’s just ten that caught my eye in no particular order.

You can see them all on the Mister Global Facebook page here. Plus, there’s the shirtless pics for all the men on the official Instagram page.

Let me know what you think in the comments. 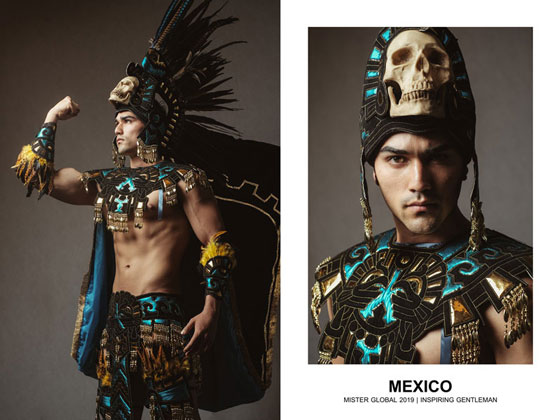 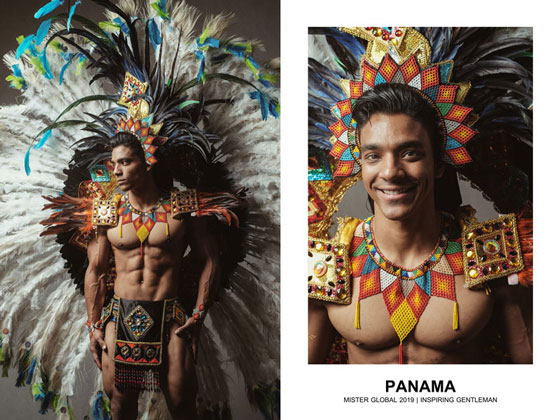 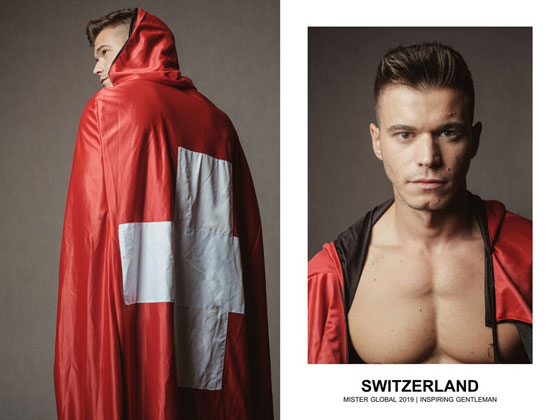 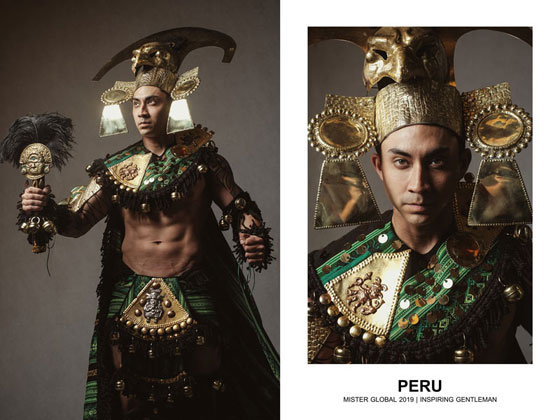 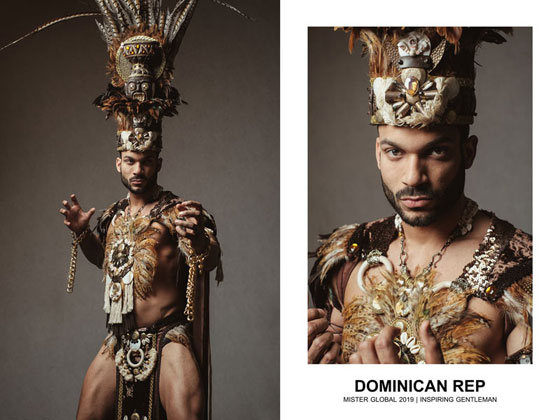 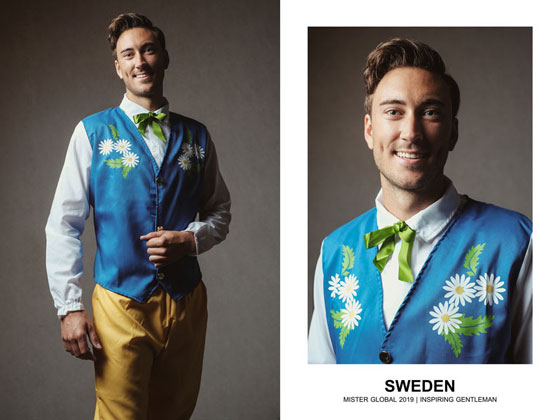 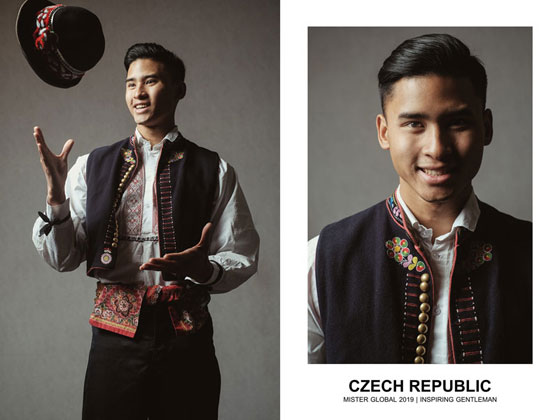 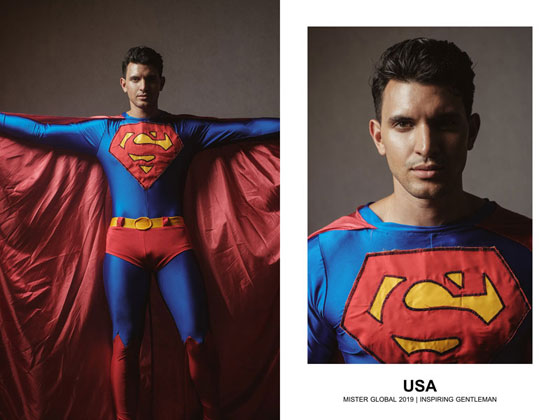 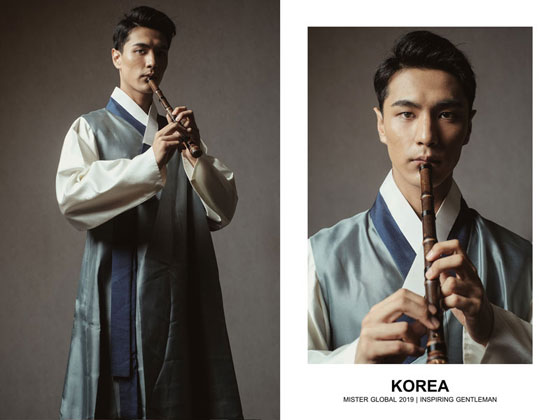 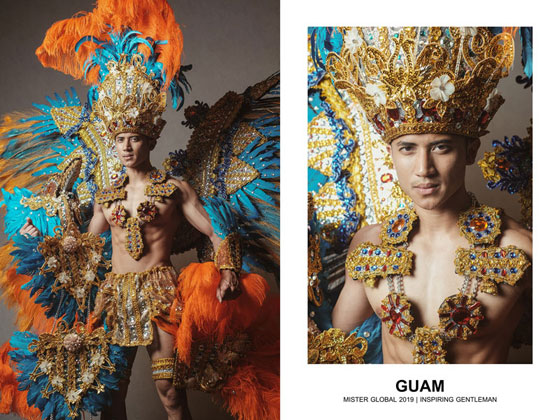 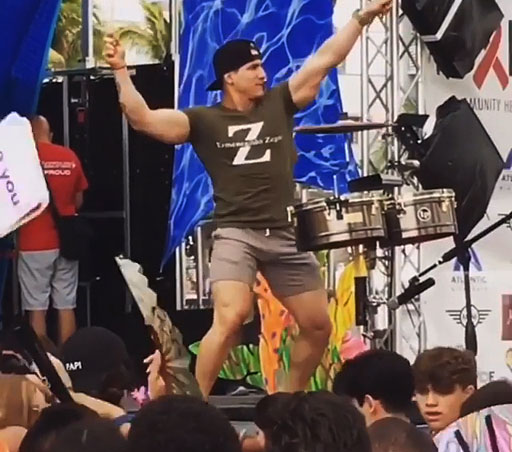 Cuban percussionist and natural body building champ Angel Emilio is giving you beats in this quick clip from South Beach in Miami, Florida. 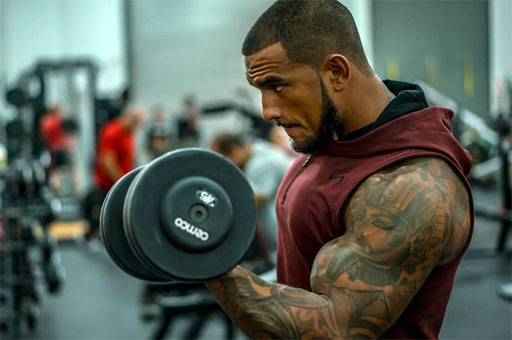 • Look at that concentration, look at that beefy bicep. Fitness guru Ramses Principe (above) is getting over Hump Day like a boss!

• After traveling to San Francisco, a gay man contracted bacterial meningococcal meningitis which resulted in the permanent loss of his hearing, temporary inability to walk, and his vision for a period. Still coping with the hearing loss, the man was recently fitted for cochlear implants. The first thing he heard when the device was turned on was his longtime boyfriend proposing to him.

• Folks in Minnesota now have a non-binary option when specifying gender on their driver’s license. Along with “M” for male and “F” for female, Minnesotans will also have “X” to choose from representing non-binary.

• After the New York Times’ bombshell investigation into Donald Trump’s wealth, New York state tax officials are looking into allegations that Trump may have committed tax fraud over the years.

• Check out the trailer for Reach starring Garrett Clayton (Hairspray Live!) as “Steven Turano,” a socially awkward band geek who shares with a pro-suicide group that he’s planning on killing himself due to bullying by his father and a school bully.

However, when Clarence, the new kid in school, befriends him, Steven’s plans are sidetracked and he forms stronger relationships with his father, friends, and teachers.

Reach will be in limited theaters and VOD October 19. 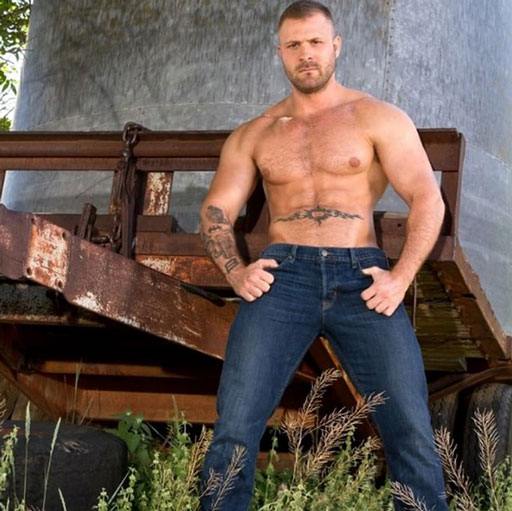 Happy Hump Day to all you shiny, happy people!

I’m back from my travels with the hubby to Europe and getting back in the blogblog swing of things.

Here’s some mid-week eye-candy to get you through starting off with the oh-so-hunky Austin Wolf.

🐻💭🌅❤️[ it wasn’t a sunrise, instead it was a beautiful sunset ] but when you are next to me, it kinda doesn’t matter what time of the day it is 😘 ] #goodmorning #mine #colorsofsummer #beachplease #myman #loveislove #summertime #lovehim #togetherisbetter #goodmemories
A post shared by Alexander Abramov (@abramov_lex) on Aug 15, 2018 at 6:18am PDT

You can be affraid and still do . You can doubt and still act . That is bravery . #sweden #södermalm #fitnessmotivation #dailyfitness #sunset #shirtlessboy #blackmen #abgoals #motivation #lake #swim #sunfun
A post shared by JW (@green.joel) on Aug 13, 2018 at 10:06am PDT 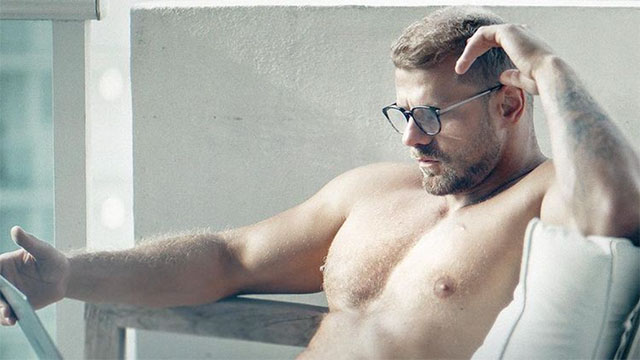 Today’s Hump Day Hunk is the woofy Andrew Serkin, based in Miami Beach. Serkin makes working on his computer look a whole lot sexier than me catching up on The Randy Report. END_OF_DOCUMENT_TOKEN_TO_BE_REPLACED 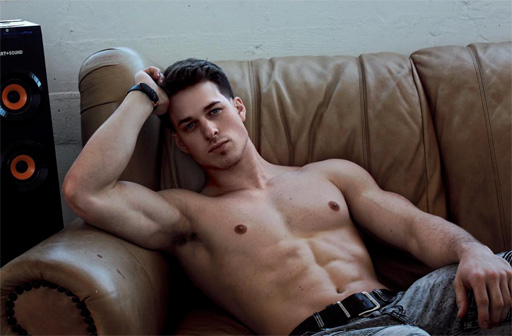 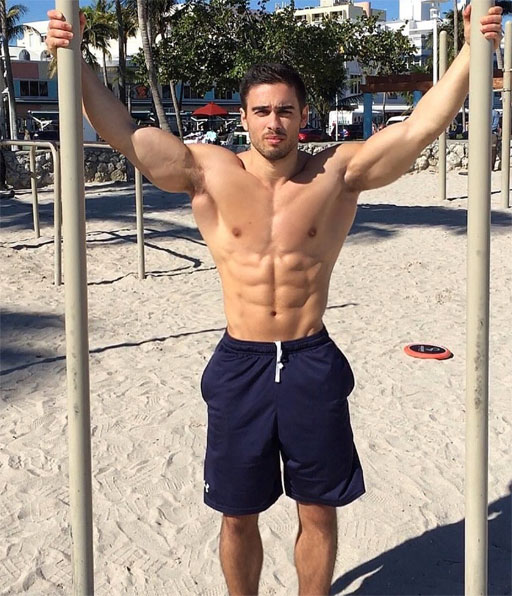 I’ve been on a blogging roll this morning, but stopping and alternating hours with working on choreography for South Pacific at San Diego Musical Theatre. We started rehearsals last night and open April 28. So, if you’re in the area come check out the show!

I’m getting up to get some sunlight on my face like Dr. Marco (above) who’s not only a fitness trainer but a medical student!

Life is all about balance! Finding that perfect split will provide not only efficiency but less stress as well 😏 @1212_photography
A post shared by Quin Bruce (@quin_bruce) on Mar 28, 2018 at 1:11pm PDT

MORE LIFE | MORE EVERYTHING! 🙏🏽 Today I turn 27 years young and fulfilled with nothing but blessings around me. From the my family to close friends and ofcourse all of who guys who I share my journey and passion with. Last year was a great one but this one will be BETTER. Becoming wiser as I’m learning from mistakes while making sure to NOT do them again. Nothing but BIG plans this year which I can’t wait to share with you guys. – Now where’s my cake?!🤔🎂 – #Blessed #DestinedForGreatness #MiaFitness
A post shared by Ramses Principe (@mia_fitness) on Mar 26, 2018 at 6:13am PDT 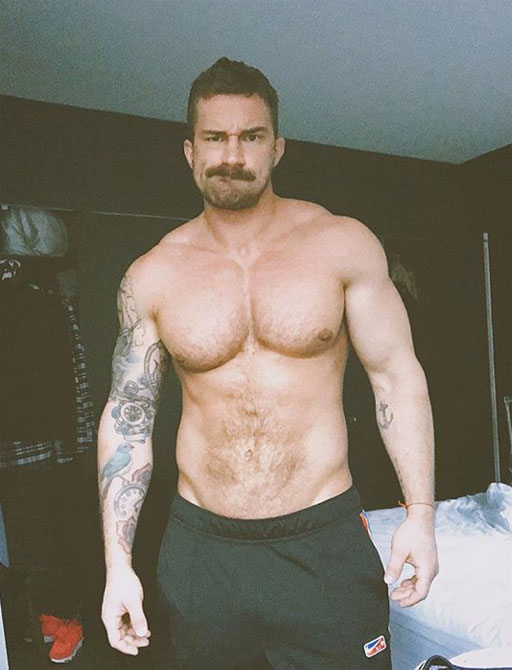 What’s the answer to a blah Wednesday? Woofy eye-candy to get over Hump Day!

Coping with the current snow storm in NYC, InstaHunk Alex Abramov (above) is not having the light: “When it’s mess outside and you even don’t have enough light to take a nice picture after workout, so you are just standing there and pretending that you took picture on Polaroid.”

Meanwhile, Nick Sandell (below) seems to have not only found the light but better weather.

If I had to work 9-5! Blue would be the color #ipfitfin @wanderaguiar_photography – – – #photoshoot #9to5 #officejob #mensstyle #menwithstyle #menshealth #mensfitness #mensfashion #menswear
A post shared by Wayne Skivington (@wayne_skiv04) on Mar 5, 2018 at 5:42pm PST

Another one from the other night. Huge thank you’s to @eltonjohn and @davidfurnish for inviting us back to your @ejaf Oscars party! The evening was amazing and it was truly incredible to see so many inspiring, generous people giving so selflessly to such an important cause of creating an AIDS free future! #Oscars2018 📷: @iamjmccarthy @gettyentertainment
A post shared by gus kenworthy (@guskenworthy) on Mar 6, 2018 at 8:22am PST

Sometimes I wish I had a ‘normal’ life. Normal job, schedule, paycheck & colleagues. A life more predictable, a life more steady, a life that isn’t constantly shifting (physically and emotionally). Then I wake up in the morning and see all that I have. I see the excitement that is my every day and the people that make those days an adventure. Thank you for accepting me as I am and for embracing the uniqueness that is me. ❤️ . Photo: @darencornell . . . . #photooftheday #hiimtom #love #inspiration #art #music #lgbt #gay #musician #songwriter #guitar #singer-songwriter #songwriter
A post shared by Tom Goss (@tomgossmusic) on Mar 7, 2018 at 11:05am PST