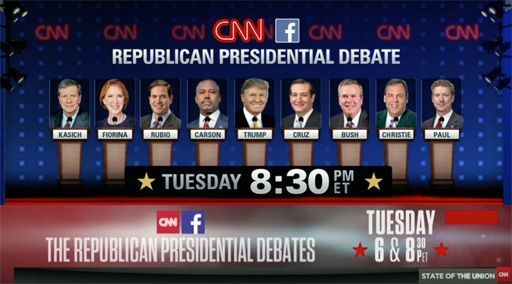 CNN has announced the participants in the final Republican debate of 2015 in Las Vegas on Tuesday, December 15.

Even when scripted, the zingers at a political debate – when they land – are a nice respite from the constant harping on the same policies over and over.

At last night’s second GOP debate one of the lighter moments came when the moderators asked each candidate to offer an idea for what their Secret Service code name might be.

Jeb Bush was clearly prepared when they got to him: “Eveready.” (Bush later told reporters Everready was his codename during his governorship of Florida).

Bush then turned to Donald Trump standing to his right and added, “It’s very high-energy, Donald.”

As political followers know, The Donald has chided Bush for being “very low energy.”

The two opponents then shared a low-five and the crowd smiled.

For your entertainment, head over to the Washington Post where they have come up with a little gadget that computes your Secret Service codename. Apparently, my codename would be “Ringbolt.”

From GOP hopeful (or not so ‘hopeful’) Rick Santorum’s spokesman via Twitter:

Tune in this Sunday at 10AM ET.

Both sides in the same-sex marriage debate are looking to the Supreme Court as it decides whether or not to weigh in on the issue. The High Court is set to discuss cases from Kentucky, Michigan, Ohio and Tennessee, and decide whether to rule on petitions challenging state bans on same-sex marriage.

We’ll debate what has become a key social issue within the country, exclusively with Ted Olson, former Solicitor General who served as Co-Counsel for the plaintiffs in Virginia’s same-sex marriage case, and Tony Perkins, President of the Family Research Council.