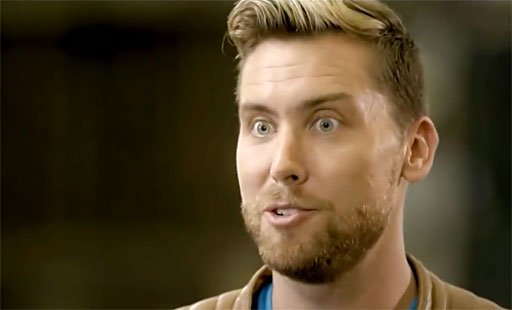 Lance Bass, the openly gay member of the boy band *NSYNC, has produced a new documentary that chronicles the behind-the-scenes story of his former manager and producer titled, The Boy Band Con: The Lou Pearlman Story.

In the 1990s, Lou Pearlman became fascinated by the success of the New Kids on the Block and set out to replicate their business model.

Beginning with the Backstreet Boys, the best-selling boy band of all time racking up over 130 records sold, the music impresario would go on to create and manage the bands *NSYNC, O-Town, LFO, Take 5 and US5.

All of those acts would eventually sue him in court for fraud and misrepresentation.

In 2008, Pearlman would be convicted of perpetuating a huge Ponzi scheme that bilked over $300 million from investors. He was sentenced to 25 years in prison, where he would eventually die in 2016 at the age of 62.

Along the way, there were also allegations (never proven) of inappropriate sexual advances to the boys of his bands.

In 2009, Rich Cronin of LFO told Howard Stern that auditioning for Pearlman included the producer asking Cronin to take his shirt off and then massaging the singer’s bare shoulders.

When Stern asked if Pearlman ever made a sexual move on him, Cronin reportedly replied, “Eventually he did – some other dudes went for it. And if you did, he took care of you. He’d buy them cars…”

The new documentary, available on YouTube Originals, is the first time Boy Band members themselves have shared their perspective on Pearlman’s story.

In the trailer, several of the band members express their surprise when they finally starting making money, but not nearly what they felt they deserved after selling millions of records.

Bass presented the film at the SXSW Festival in Austin, Texas, this week and sat down with the local ABC affiliate to chat on the film.

So, according to reports, former talent agent Peter Strain in NYC stole over $500K from one client in 2011.

Ultimately, to pay the client back, Strain stole from another client.

And on and on it went.

Preet Bharara, the United States Attorney for the Southern District of New York, and George Venizelos, the Assistant Director in Charge of the New York Field Office of the Federal Bureau of Investigation (FBI), announced that Peter Strain, a talent agent for film, television, and Broadway actors, pled guilty today in Manhattan federal court to stealing more than half-a-million dollars from his clients, which he used to purchase personal luxury retail goods and artwork, among other things.

Strain was originally charged in November 2013, and he pled guilty today before United States District Judge George B. Daniels.

Between approximately 2011 and 2013, Strain diverted money he received on behalf of three clients and used it to, among other things, pay for personal luxury retail goods and artwork. In order to conceal his theft and ensure that his clients allowed him to continue receiving money on their behalf, Strain repeatedly lied to his clients about why he had failed to timely remit their money. 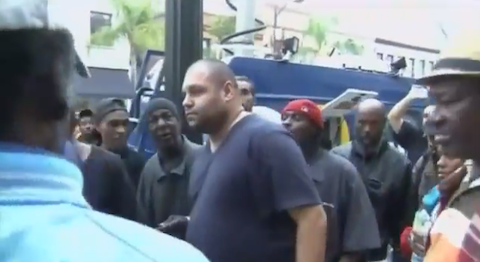 A brawl broke out at the Apple Store in Pasadena after a man “hired” approximately 70-80 homeless folks to wait in line overnight for vouchers to be able to buy new iPhones that he could then sell for more than retail.

Problem was after buying a bag full of phones he stiffed the homeless folks outside. Didn’t take long for things to escalate:

Two people were already arrested for fighting in the long line outside the Pasadena store before dozens of people hired from a nearby homeless shelter attacked a man who refused to pay them for their hours-long wait, cops said. “He was cheating us,” Calvin Windell Pleasant told the Los Angeles Times.

The destitute group said they were driven to the Colorado Blvd. store by vans from a Los Angeles shelter, where a man promised $40 each for them to wait in line for the coveted smartphones. But when the doors opened, the businessman only managed to buy a handful of phones before the store ordered him out and deemed the rest of his vouchers useless. And when he refused to pay the rest of the 70 to 80 people he hired to stand in the line, the furious group pounced.