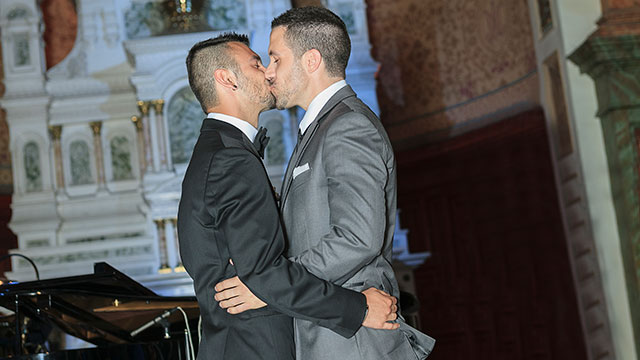 The state of Nevada is on its way to making history as the first state in the U.S. to acknowledge all marriages in its state constitution.

On the ballot this election cycle was Question 2 which asked voters to remove an existing provision that only marriage between a male person and a female person would be recognized.

The state constitution will be amended to require the state (and its political subdivisions) to recognize all marriages and issue marriage licenses to couples regardless of gender, and to treat those marriages equally under the law.

The ballot question did include explicit language that allows religious organizations and clergy to refuse to perform a marriage that they don’t agree with on religious terms.

Same-sex marriages became legal in the Silver State in 2014, and across the nation in 2015 thanks to the U.S. Supreme Court’s historic Obergefell v. Hodges ruling.

At this writing, the Secretary of State’s website shows the measure passing overwhelmingly by 61.69 percent to 38.31 percent.

Gary Brewer, who married his husband this past May in a small ceremony, told local news affiliate FOX5, “It feels really good to know this is the direction Nevada has taken and I feel really proud to call the state my home,”

Chris Davey of the Henderson Equality Center told FOX5 the legal amendment won’t change daily life for LGBTQ Nevadans at this time, but could prove to be crucial if the now-conservative leaning U.S. Supreme Court were to rule in favor of rolling back rights for same-sex marriages.

As I reported last month, on the first day of the Supreme Court’s new term, conservative Justices Clarence Thomas and Samuel Alito chose to reignite their discontent with the 2015 decision that made marriage equality the law of the land.

Justice Thomas wrote that the Obergefell ruling “enables courts and governments to brand religious adherents who believe that marriage is between one man and one woman as bigots, making their religious liberty concerns that much easier to dismiss.”

Since that time, Amy Coney Barrett (who has a history of anti-LGBTQ views) has been confirmed to replace recently-deceased Justice Ruth Bader Ginsburg increasing the conservative-leaning of the court to 6-3.

Just this week, Barrett heard arguments in a case regarding a Roman Catholic adoption agency in Philadelphia (Catholic Social Services) that claims a First Amendment right to decline to match foster children with same-sex households even though it signed a contract with the city agreeing not to engage in anti-LGBTQ discrimination through its taxpayer-funded activities.

According to Washington Blade reporter Chris Johnson, the court appeared to side with CSS after the oral arguments.

With these Supreme Court developments in mind, state-based legal moves like Question 2 in Nevada become all the more important for LGBTQ Americans.

• Charlie Carver, currently starring in Netflix’s The Boys in the Band says he came out as gay after a coworker slapped him for appearing gay in public

• Don’t miss the all-star benefit performance of The Great Work Begins: Scenes from Angels in America

• Drag Out the Vote has now unveiled a new voter initiative: Divas for Democracy: United We Slay, a digital variety show bringing together some of the biggest names in theater and drag

• The Advocate: Supreme Court Justices Samuel Alito and Clarence Thomas have opened the court’s term by calling for the overturning of its 2015 marriage equality decision. The Obergefell v. Hodges decision threatens religious liberty, Alito wrote in a statement in which Thomas concurred.

• The Gaily Grind: Nearly a week after President Trump instructed the far-right extremist Proud Boys group to “stand back and stand by” during 2020’s first presidential debate after being asked to condemn them, internet users have reclaimed the #ProudBoys hashtag by flooding Twitter and Reddit with photos of gay men in love and expressing physical affection.

• Pink News: Nursing student Michelle Ramos Vargas has become the 30th known trans person to be killed in the United States so far this year, and the sixth killed in Puerto Rico in the same period. Vargas’ body was found with multiple gunshot wounds in San Germán, Puerto Rico in the early hours of September 30.

• NowThis News: A super-cut of the times Donald Trump, who now has COVID-19, has mocked face masks. ‘A lot of people don’t want to wear masks.’

• Wall Street Journal: The IRS is investigating longtime National Rifle Association CEO Wayne LaPierre for possible criminal tax fraud related to his personal taxes. According to public filings, his total reported pay from 2014 to 2018 was $11.2 million. In August, he was charged in a civil suit by New York Attorney GeneralLetitia James with taking millions of dollars of allegedly undisclosed compensation in the form of free yacht trips, private jet flights for his family, exotic safaris and other benefits.

• BBC: Facing a rising rate of coronavirus infections in France which began to grow exponentially in late August, officials in Paris will shut all bars completely from Tuesday after the French government raised the city’s coronavirus alert to maximum following a period of high infection rates. On Saturday, the country reported nearly 17,000 infections marking the highest rate since the country started widespread testing.

• Star-Telegram: Trump supporter Jason Lata was arrested on suspicion of assault causing bodily injury after he punched a man in a video clip that went viral. Video of the incident shows Lata in a hat yelling profanities at the victim and screaming “Turn it off!” as an anti-Donald Trump rap song by YG appeared to be playing in the background. Lata, who was standing with other men who were wearing Trump T-shirts, then punched the victim in the face.

Violent Trump supporter at a rally in Texas assaults a peaceful counter-protester pic.twitter.com/s950Q3kgTj

On Thursday, George Takei raised eyebrows for comments he made regarding Supreme Court Justice Clarence Thomas and Thomas’ dissent on the recent marriage equality ruling.

Among other things Takei referred to Thomas as a “clown in blackface.”

Actor and gay rights advocate George Takei is slamming Supreme Court Justice Clarence Thomas after his dissent to last week’s decision legalizing same-sex marriage nationwide claimed that the government can neither give nor take away human dignity. “He is a clown in blackface sitting on the Supreme Court. He gets me that angry,” the former “Star Trek” star said in an interview with Fox 10 this week in Phoenix, standing alongside his longtime partner and husband. “For him to say slaves had dignity … I mean, doesn’t he know slaves were chained? That they were whipped on the back?” Takei asked.

Today, Takei apologized for his “regrettable” choice of words:

I am reminded, especially on this July 4th holiday, that though we have the freedom to speak our minds, we must use that freedom judiciously. Each of us, as humans, have hot-button topics that can set us off, and Justice Thomas had hit mine, that is clear. But my choice of words was regrettable, not because I do not believe Justice Thomas is deeply wrong, but because they were ad hominem and uncivil, and for that I am sorry.

I often ask fans to keep the level of discourse on this page and in comments high, and to remember that we all love this country and for what it stands for, even if we often disagree passionately about how to achieve those goals. I did not live up to my own high standards in this instance. I hope all of you have a wonderful, safe and joyously free July 4th, the first where all married couples in the U.S. can enjoy the full liberties of matrimony equally. It is truly a blessing to be an American today. 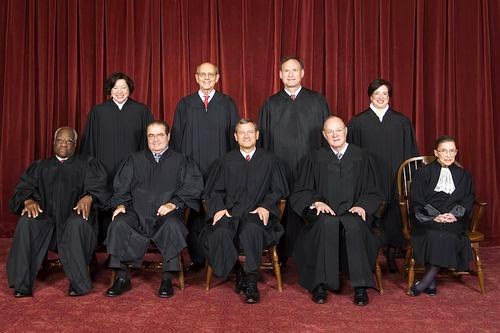 In fact, she recently asked the US Supreme Court to extend the current stay on one of those rulings as the case awaits it’s turn at the 11th Circuit Court.

Color me shocked, but that request was just denied.

Although Justice Clarence Thomas (who oversees such requests for the 11th Circuit) referred the matter to the full court – which decided against extending the stay – both he and Justice Scalia noted that they would have granted the extension.

Here’s the background on the case via Chris Johnson at the Washington Blade:

In August, U.S. District Court Judge Robert Hinkle ruled against the state’s ban on same-sex marriage, known as Amendment 2, but placed a stay on his order until 91 days passed after the appeals process was completed in the Utah, Oklahoma and Virginia marriage cases. When the U.S. Supreme Court refused to review these cases, it set for date for same-sex couples to be able to marry in Florida starting Jan. 5.

Bondi tried to extend the stay on the same-sex marriages as she continued to defend the law in court, but her requests were by denied by the district court as well as the U.S. Eleventh Circuit Court of Appeals, which ordered the stay to be lifted “at the end of the day” on Jan. 5.

Nadine Smith, CEO of Equality Florida, issued this statement: “We are thrilled the U.S. Supreme Court has denied the State’s request to delay marriages in Florida. Every day of delay is another day of harm experienced by thousands of loving and committed same-sex couples in Florida. It’s time to break out the wedding bells! We look forward to January 6th being a special day — Florida is ready for the freedom to marry.”

I reported yesterday that Osceola County Clerk of the Courts Armando Ramirez has stated that if the stay was lifted, his courthouse would open at 12:01 a.m. on Jan. 6 to issue marriage licenses and possibly perform services.

I mentioned I’m shocked as this is the first time that SCOTUS has denied such a request before a federal appeals court had ruled on the issue. That said, I think it’s a clear indication of the thinking of the high court in terms of marriage equality 🙂 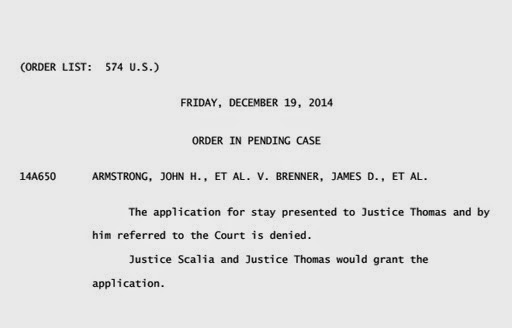