A vote scheduled today for the 80 member board of the Boy Scouts of America could officially end the organization’s longtime ban on openly gay scout leaders.

In an effort to assuage some conservative religious groups, the new policy allows church-led scout groups to choose adult leaders “whose beliefs are consistent with their own.”

The Boy Scouts’ executive committee unanimously voted earlier this month to approve a resolution that would effectively end the ban on gay adult leaders. Today’s vote makes that resolution official.

“The vote by the executive committee to recommend that gay, lesbian and bisexual adults be allowed to work and volunteer for the Boy Scouts is a welcome step toward erasing a stain on one of our nation’s most storied organizations,” said HRC President Chad Griffin. “But writing in an exemption for troops organized by religious organizations undermines the potentially historic nature of today’s vote.”

“As we have said countless times, half measures are unacceptable and discriminatory exemptions have no place in the Boy Scouts. It’s long overdue that BSA leaders demonstrate true leadership and embrace a full national policy of inclusion that does not discriminate against anyone because of who they are,” Griffin said.

The organization took no formal action on its current policy to ban gay adult leaders, but Gates said the group can no longer “ignore growing internal challenges to our current membership policy.”

Gates’ remarks were welcome news to those who have been challenging the Scouts’ longstanding anti-gay policies.

“While our work won’t be done until we see a full end to their ban on gay adults once and for all, today’s announcement is a significant step in that direction,” said Scouts for Equality executive director Zach Wahls. “I’m proud to see Dr. Gates charting a course towards full equality in the BSA.”

Yesterday, Pascal turned 18. This meant that he was now considered an adult by the Boy Scouts of America, and under the current rules adopted by the BSA, Pascal now cannot be a part of the organization that has meant so much to him.

On his 18th birthday, he shared this open letter to former U.S Defense Secretary Robert Gates, who now serves as President of the Boy Scouts of America, wherein he urges Gates to end the ban on gay adult Boy Scouts.  The full essay appeared on Time.com.

I was just 4 years old when I went on my first camping trip with my older brother and his Cub Scouts pack. After that, I was hooked.

Scouting has been a constant part of my life… The Boy Scouts taught me everything from how to survive in the woods to the morals and values that shaped the person I am today. For that, and for the good times and friends I made through Scouting, I will always be grateful.

Today is my 18th birthday, a milestone on my path to becoming an adult and the day I am no longer eligible to be a Boy Scout because I am gay. Despite the Boy Scouts’ historic decision last year to open its ranks to gay youth, the Scouts still ban gay adults. And as of today, that means me.

Mr. Gates, only you have the power and experience to bring an end to the unwarranted, unjust and un-Scout like ban on gay adults. Every day that you do nothing, more boys and parents struggle with their place in Scouting, in their communities and in their families.

Openly gay adults will eventually be allowed in Scouting, Mr. Gates. As support for equality continues to grow, Americans will soon demand it. The question before you, then, is not whether the ban should end, but how many more young people like me will be a victim of your failed leadership if you do nothing.

GLAAD shares the historic news that for the first time, New York-area Boy Scouts and members of the Brooklyn Chapter of Scouts for Equality will be among the groups leading the 44th Annual NYC Pride March:

Active and former Boy Scouts and leaders will present the American flag during the national anthem at the NYC Pride March opening ceremony and subsequently serve as Color Guard during the march, leading more than 14,000 participants down Fifth Avenue in a celebration of recent advancements made for LGBT equality.

Despite the BSA’s national policy that bans gay and lesbian adults from participating in Scouting, the Greater New York Councils, which serves nearly 150,000 Scouts in New York City, has previously stated its commitment to full inclusion of gay Scouts regardless of age.

“NYC Pride warmly welcomes Scouts for Equality to the route as our 2014 NYC Pride March Color Guard,” said NYC Pride March Director, Dave Studinski. “Our 2014 theme is ‘We Have Won When We’re One,’ and this message resonates well with Scouts for Equality’s mission. From their participation in our step-off ceremony through the moment they pass the historic Stonewall Inn, may the Scout’s joint display of our nation’s colors and the rainbow flag remind us all that the LGBT movement seeks not tolerance, but acceptance as equals.” 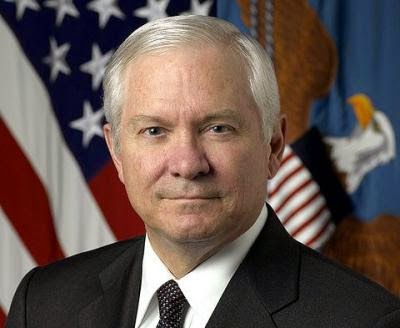 Bill Gates, former Secretary of Defense and director of the CIA, is the newly elected president of the Boy Scouts of America.

In one of his first interviews as BSA president, Gates says he would have included openly gay adult Scoutmasters during the organizations debate on gay scouts. But now he says it would be too problematic to revisit the issue at this time.

‘I was prepared to go further than the decision that was made,’ Gates told the Associated Press the day after he was elected.

‘I would have supported having gay Scoutmasters, but at the same time, I fully accept the decision that was democratically arrived at by 1,500 volunteers from across the entire country.’

Gates went on to say he fears the contentious issue of gay scout leaders may cause bigger divisions within the BSA, and so he does not want to open up the gay debate again.

‘Given the strong feelings — the passion — involved on both sides of this matter, I believe strongly that to re-open the membership issue or try to take last year’s decision to the next step would irreparably fracture and perhaps even provoke a formal, permanent split in this movement — with the high likelihood neither side would subsequently survive on its own’ he said.

During his time as Defense Secretary, Gates was instrumental in ending “Don’t Ask, Don’t Tell” policy for US Armed Forces. 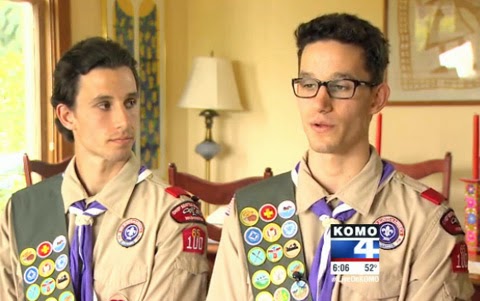 Twin brothers Liam and August Easton-Calabria are Eagle Scouts.   But soon, Liam (right) will be forced out of the Scouts because he is gay. His brother is straight.

Liam’s sexual orientation has never affected his standing in the Scouts, but on his twenty-first birthday, when he completes his commitment to BSA’s Venture Crew, he will no longer be allowed to participate with the Boy Scouts of America.

Additionally, their scoutmaster Geoffrey McGrath is fighting the Scouts after being forced out over his sexual orientation.  Not only was McGrath forced out, but the BSA rescinded his troop’s charter for standing by him. 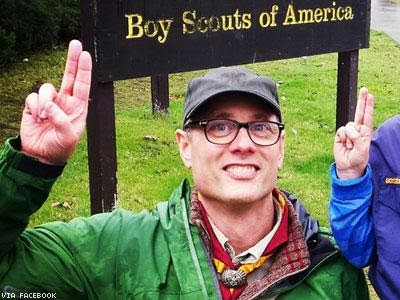 When a Seattle-based Boy Scouts troop refused to kick it’s openly gay scoutmaster to the curb, the Boys Scouts severed ties to the troop.

Geoff McGrath was told his scoutmaster registration would be revoked
because he was openly gay (which the parents of the scouts were made
aware of before their children joined Troop 98). The Rainier Beach
United Methodist Church, which hosted the troop, refused to force him to leave.

Thirty-nine Washington state legislators have signed a letter
standing by McGrath and the church, calling the Boy Scouts’ actions
against McGrath on the basis of his sexual orientation “unacceptable.” 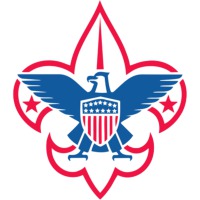 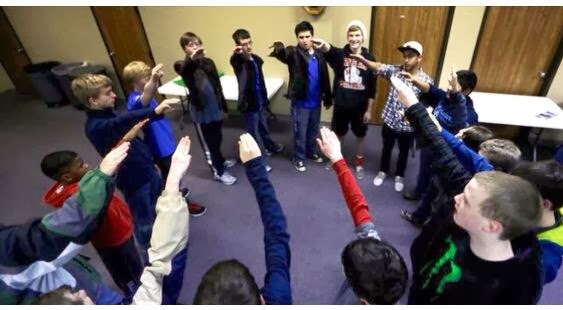 You may have heard about Trail Life. It’s the new “alternative” to the Boy Scouts that still bars gay members.

Via the Mercury News, check out the pic above showing the new members saluting and reciting their “creed.”

Anything odd jump out at you…?

UPDATE:  Via Business Insider, John Stemberger, the chairman of the board for Trail Life USA, says he initially saw the picture in a story that was published on MSN on Saturday.

“We were horrified when we saw the photo in question on the MSN site and immediately investigated the situation,” Stemberger said in a statement Monday.

“Many Boy Scout Troops have a tradition of ending their troop meetings with the boys gathering in a circle and then singing the song ‘Taps’ which is a slow ceremonial piece of music played or sung at the end of the day. The Boy Scouts that do this closing ceremony start singing the song with their hands raised straight into the air with the scout sign and then gradually lower their hands till they get to the end of the song when hands are at their side. This longstanding Boy Scout tradition was being followed with this Texas Trail Life troop using the Trail Life sign.”

“Unfortunately the reporter (either intentionally or unintentionally) caught this photograph at the exact angle which makes their arms look like they are in some kind of a stationary mid-air salute– which they are not.”