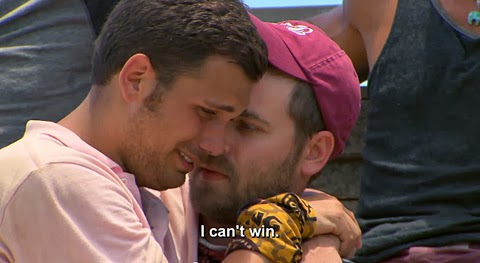 On last night’s Survivor: Blood vs. Water, viewers were treated to a meltdown out of nowhere from gay Republican Colton Cumbie the likes of which have never before been seen on the show.

Welling up with tears, Colton begins blubbering that he didn’t want to be in the game anymore. During the exchange with host Jeff Probst, it was revealed that Colton feigned an appendicitis in his previous season.

In the second clip, Colton tries to rationalize what happened and then spins it into some “strategy” to help his hunky, cubby boyfriend Caleb Bankston.

Not buying that from a two-time quitter.  I’m a big fan of the show and I’m personally glad I don’t have to watch Colton on the show ever again.  When the going gets tough, Colton gets out.  No respect for that.