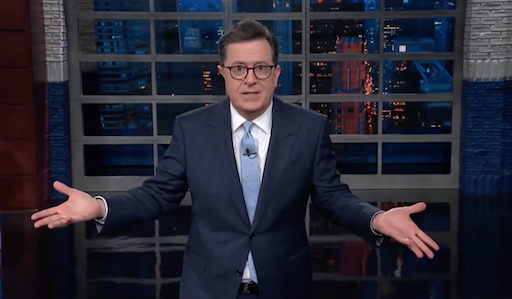 “Now, I know you all came here tonight to hear me talk about trade tariffs,” Stephen Colbert deadpanned on Monday’s Late Show, after recapping the Oscars. “But we’re not talking about trade tariffs tonight” he added, “because right before we taped this show, the entire news cycle jumped on the bus to crazy town. At the wheel?” Former Trump campaign aide Sam Nunberg. Special Counsel Robert Mueller subpoenaed Nunberg in the Russia investigation, and Nunberg spent much of Monday on TV insisting he won’t cooperate.

“Nunberg took over cable TV like a car chase,” Colbert said, playing some choice CNN and MSNBC clips. He found Nunberg’s defiance a little puzzling: “You know Mueller can arrest you, right? That’s like saying ‘Eat me’ to Hannibal Lecter.” And yet Nunberg talked and talked and talked, dropping tantalizing clues and unsubstantiated bombshells. “This guy is like a Snickers bar — the peanuts just keep coming,” Colbert marveled.

By the way, after spending all afternoon chasing every news show he could get on, Nunberg eventually told the AP last night, “I’m going to end up cooperating with them.”

Please keep your hands and feet inside the car until the ride comes to a complete stop.