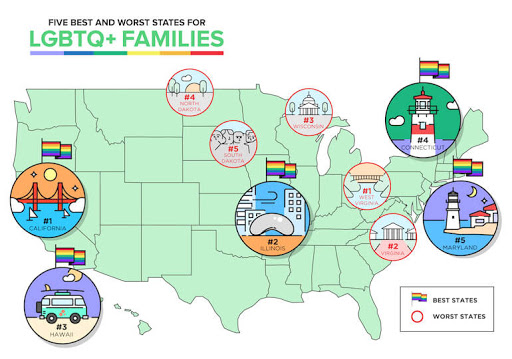 Move.org, a great resource website for all things moving, has done a deep dive into several important factors LGBTQ folks should consider when moving to a new state to start a family and they’ve ranked all 50 states from best to worst.

Move.org utilized data from HRC Foundation, the Movement and Advancement Project, and the Williams Institute at UCLA.

“We decided to consider the safety of LGBTQ individuals first and foremost, so we ranked whether the state had hate crime laws in place, whether or not conversion therapy was allowed for minors, and whether anti-discrimination laws were set,” wrote the researchers.

So, which state is best for starting a family?

California came out on top thanks to the Golden State’s comprehensive hate crime laws that cover both sexual orientation and gender identity, broad anti-discrimination laws, plus so-called ‘conversion therapy’ is banned for minors.

The rest of the top five are:
2. Illinois
3. Hawaii
4. Connecticut
5. Maryland

Jumping to the other end of the spectrum, West Virginia ranked last in terms of LGBTQ criteria.

The Mountain State offers no protections in terms of anti-discrimination or hate crime laws. There’s no law protecting minors from conversion therapy. Although, the state does allow same-sex couple to adopt.

This doesn’t mean you shouldn’t move to these states. It’s important to note that every state has a few cities that are good landing spots for LGBTQ+ families.