Veteran sports writer Howard Balzer is reporting that the Los Angeles Rams (then the St. Louis Rams) drafted SEC Defensive Player of the Year as part of a deal to avoid being featured on the HBO series “Hard Knocks.”

Many teams avoid the TV exposure on the show due to the intrusive nature of the cameras into every part of team life.

It’s been almost two years since the St. Louis Rams selected defensive end Michael Sam in the seventh round of the 2014 draft. At the time, the Rams were hailed for being progressive and drafting the first openly gay player in the National Football League. It turns out, according to multiple sources, that the league agreed not to ask the Rams to appear that year on HBO’s yearly summer series, HARD KNOCKS, if they drafted Sam.

Shortly after his college career at Missouri ended, Sam came put publicly, acknowledging he is gay. The SEC Co-Defensive Player of the Year in 2013, Sam was considered a fifth-round pick at best. But, as the draft proceeded on the final day, it appeared he might not be drafted at all. It is believed the NFL didn’t want to face questions about that eventuality, and the Rams were viewed as the ideal spot because of St. Louis’ proximity to the Missouri campus in Columbia, 90 miles away, and head coach Jeff Fisher’s ability to deal with whatever distractions there might be.

So it was that the Rams saved the day, selecting Sam with the 249th pick of a 256-player draft.

In other words, the NFL used Sam as a pawn to avoid being painted as anti-gay.

Initially seen as a third or fourth round pick, within hours of coming out his stock dropped to a possible fifth or sixth round. In the end, the Rams drafted Sam at the 249th pick in the seventh round.

Clearly, Sam’s coming out dramatically affected his chances due to rampant homophobia in the NFL.

Sam has since said he wished he’d never been drafted by the Rams.

“If I had my way, I really do wish I went undrafted,” Sam said, according to WCBS. “I could have actually went to a team who really needed pass rush, and needed a defensive end who could pass rush the quarterback. But the Rams, even though I learned a log from Chris Long and [Robert] Quinn, I think that I could have done better being on an active roster right now if I went to a different team.” 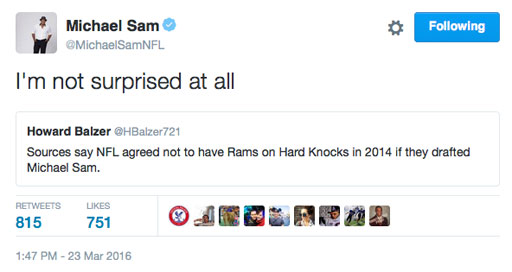