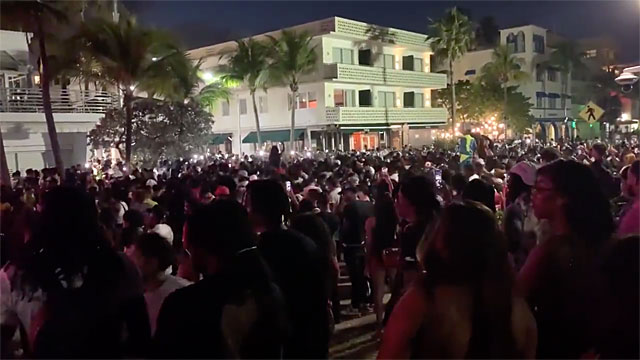 After a year of the coronavirus pandemic and low-to-no restrictions on safety measures in Florida, people flocked to Miami Beach for spring break overwhelming the city’s entertainment district.

Noting the crowds were in the thousands, the city announced a curfew of 8 p.m. with the causeways to Miami Beach from the mainland closed to non-local traffic starting at 9 p.m.

Miami Beach officials struggled to enforce a new 8 p.m. curfew on Saturday in the city’s South Beach entertainment district. Videos on social media from showed hundreds of people gathered outside after dark on Saturday and law enforcement dispersing crowds.

In trying to control crowds and taking a subject into custody, Miami Beach police said they used pepper balls. Two officers were also injured and taken to the hospital, according a departmental tweet. Police arrested at least a dozen people, according to CNN.

The city of Miami Beach, worried about the bigger than usual crowds filling the streets of South Beach and the threat of a resurgent coronavirus, declared a state of emergency and moved up its curfew on Saturday in an effort to shut down late-night spring break partying that it said had gotten out of control.

The emergency measures are in place for 72 hours but could be extended through the end of spring break on April 12.

Here’s the report from the Miami Herald: