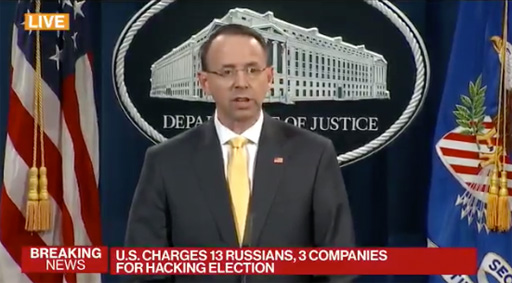 At a press conference this morning, Deputy Attorney General Rod Rosenstein announced Special Counsel Robert Mueller has indicted 13 Russian nationals and three Russian entities with “the stated goal of “spread[ing] distrust towards the candidates and the political system in general.”

The indictment says that the aim of the defendants was “supporting the presidential campaign of then-candidate Donald J. Trump and disparaging Hillary Clinton.”

Operating under the name Internet Research Agency LLC, the defendants “sought, in part, to conduct what it called ‘information warfare against the United States of America’ through fictitious U.S. personas on social media platforms and other Internet-based media.”

The indictment lists, for example, Instagram accounts named “Woke Blacks,” “Blacktivists,” and “United Muslims of America” to discourage minorities from voting for Hillary Clinton or even voting at all.

In a Feb. 10, 2016, planning memo, the Russians were instructed to “use any opportunity to criticize Hillary and the rest (except Sanders and Trump — we support them).”

The operations also denigrated candidates including Ted Cruz and Marco Rubio, Trump’s rivals in the 2016 Republican primary, the indictment said.

The efforts included contact with “unwitting” Trump campaign officials, with the goal of “impairing, obstructing, and defeating the lawful government functions” including the election.

The group bought advertisements on U.S. social media, created numerous Twitter accounts designed to appear as if they were U.S. groups or people, according to the indictment. One fake account, @TEN_GOP account, attracted more than 100,000 online followers.

The Russians tracked the metrics of their effort in reports and budgeted for their efforts. Some traveled to the U.S. to gather intelligence for the surreptitious campaign, according to the indictment. They used stolen U.S. identities, including fake driver’s licenses, and contacted news media outlets to promote their activities.

In September 2016, the group ordered one worker to “intensify criticizing Hillary Clinton” after a review found insufficient anti-Clinton activity.

Donald Trump, who has called the investigation into Russian meddling a hoax, was briefed on the indictments this morning.

You can read the full indictment here. I suggest you take a minute and do so. This is not a hoax.