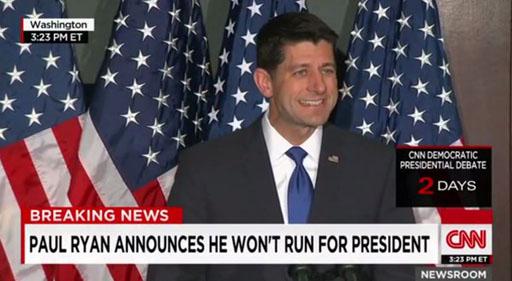 Speaker of the House Rep. Paul Ryan held a press conference today to attempt to quell rumors that he’s running a “shadow campaign” to be the Republican Party’s presidential nominee in the event of a “contested convention” this summer.

“I want to put this to rest once and for all,” Ryan said of speculation that he could be chosen as the Republican presidential nominee this summer in a multiballot convention.

“Let me be clear: I do not want, nor will I accept the Republican nomination. So let me speak directly to the delegates on this: If no candidate has a majority on the first ballot, I believe you should only choose a person who actually participated in the primary. Count me out.”

“I simply believe that if you want to be the nominee — to be the president — you should actually run for it,” said Ryan, who ran in 2012 on the losing Republican ticket as the vice presidential nominee. “I chose not to. Therefore, I should not be considered. Period. End of story. I just think it would be wrong to go any other way. So, let me say again, I’m not going to be our party’s nominee.”

Folks continue to doubt Ryan’s pronouncement’s about not running for president in great part because similar protestations preceded his taking on the position of Speaker of the House.