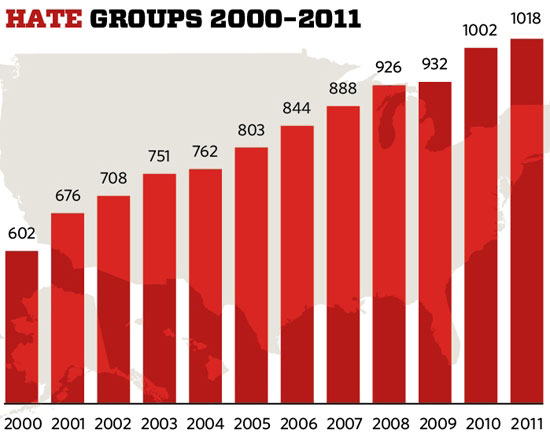 The American “radical right” grew in 2011, a third consecutive year of extraordinary growth that has swelled the ranks of extremist groups to record levels, contributing to a significant increase in the number of anti-gay hate groups, according to a report issued today by the Southern Poverty Law Center (SPLC).

Overall, the number of hate groups counted by the SPLC last year reached a total of 1,018, up slightly from the year before but continuing a trend of significant growth that is now more than a decade old.

The report adds 11 groups to the organization’s list of designated anti-gay hate groups.

The SPLC report details the growth of hate groups to a record 1,018 in 2011, up from 1,002 the year before and the latest in a series of increases going back more than a decade. But the dramatic growth came in the Patriot movement, which is composed of armed militias and other conspiracy-minded organizations that see the federal government as their primary enemy. These groups saw their numbers skyrocket for the third straight year in 2011, this time by 55 percent – from 824 in 2010 to 1,274 groups last year. In 2008, just before the Patriot movement took off, there were 149 Patriot groups, a number that metastasized to 512 in 2009.

In all, Patriot groups have increased by 755 percent during the first three years of the Obama administration. Their number has now surpassed – by more than 400 groups – the previous all-time high set in 1996, when the first wave of the militia movement peaked shortly after the Oklahoma City bombing that left 168 people dead.

…The hate groups listed in this report include neo-Nazis, white nationalists, neo-Confederates, racist skinheads, Klansmen and black separatists. Other hate groups on the list target LGBT people, Muslims or immigrants, and some specialize in producing racist music or propaganda denying the Holocaust.