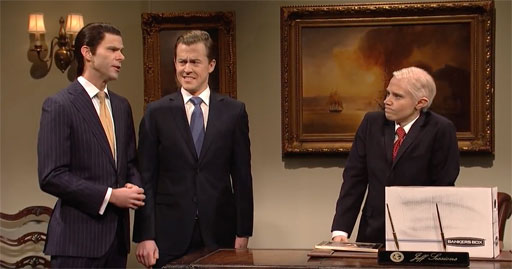 With the news that Donald Trump fired his Attorney General, Jeff Sessions, one day after the midterm elections, how could SNL not say goodbye to their “Jeff Sessions” played by Kate McKinnon?

As Sessions wonders what else he could have done to please his boss (“I don’t understand what I did wrong? I put kids in cages. I said no to gays? What more did you want?”), Bennet’s Pence finds his mind wandering: “I’m sorry, I heard the words ‘gays in cages’ and I went somewhere crazy.”

And the Trump boys, Junior and Eric, check in with Sessions to see if they are going to get “some penis” (or subpoenas, but, whatever).

And then Mueller is the final goodbye, but at least he brings a going away present.