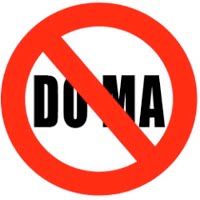 Research group the Williams Institute, together with the UCLA School of Law, submitted as part of their testimony to the recent “repeal DOMA” hearings research that demonstrates the very real impact DOMA has on married same-sex couples.

Listed below is just a short list of the many ways same-sex married couples are discriminated against by the so-called “Defense of Marriage Act.” While not a complete list, but it illustrates how many important civil rights are denied by the law.

As you can see, none of the rights listed below have anything to do with religious or church-based issues. These are all civil benefits extended by our civil government to married couples. In a country that espouses “all created equal”, clearly all married couples in this country are not enjoying the same rights and privileges.

Denied Equal Social Security Survivor or Spousal Benefits — Unlike opposite-sex couples, same-sex spouses cannot continue to claim their partner’s higher rate of benefits after their spouse has died. This can result in an average loss of $5,700 per year. This is just one way in which DOMA impacts social security and survival benefits.

Denied Equal Treatment for Bi-National Couples — There are nearly 26,000 same-sex couples in the United States who are bi-national and could be forced to separate because they cannot participate in green-card and accelerated citizenship mechanisms.
Denied Family Medical Leave Act (FMLA) Benefits — Estimates suggest that 43,000 employees would qualify for medical leave pay but are denied it because FMLA does not cover leave to care for a same-sex partner.

Denied Benefits for Spouses of Federal Employees — The Williams Institute estimates there are around 30,200 federal employees with a same-sex partner who, not being federal employees themselves, are denied spousal benefits because the federal government does not recognize same-sex marriages. This impacts health care coverage and work/injury compensation to name but a few.

Denied Veteran Partner Benefits — Around 68,000 veterans have same-sex partners that are barred from pension benefits, educational assistance and vocational training, as well as many other benefits.

Denied Equal Treatment in Taxation of Employee Health Benefits — If a company has implemented a health benefit scheme that covers same-sex partners, benefits that are taxed under federal law mean an unfair burden on both employees and employers. The Williams Institute suggests this disparity may run to over $1,000 a year.

Denied Equal Treatment in Inheritance Tax — Same-sex spouses are treated as legal strangers by the federal government and are therefore subject to different rules governing inheritance tax, so for couples that exceed the non-taxable transfer of assets there is an additional tax burden that the institute calculates could amount to, on average, as much as $4 million.