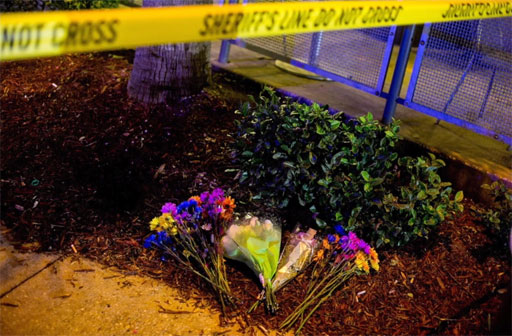 Check out this moving short film that interweaves images of mass shootings with Leonard Cohen’s “Hallelujah” and the Martin Niemöller poem, “First They Came.”

The competition asks student filmmakers in schools and colleges to create and share digital stories about significant LGBTQ+ people, places and events that have shaped our world and are impacting the future.

Goldberg was inspired by Niemöller’s poem which addresses complicity and passivity during the Holocaust. It reads:

First they came for the socialists, and I did not speak out—
Because I was not a socialist.

Then they came for the Jews, and I did not speak out—
Because I was not a Jew.

Then they came for me—and there was no one left to speak for me.

Goldberg’s film updated the text to meditate on the victims of deadly mass shootings in recent U.S. history, including the massacre at Pulse Nightclub in Orlando, Florida, which left 49 dead and 50+ wounded.

“The film illustrates how passivity in the face of injustice is complicity during World War II, but instead reframes and rewrites the 1946 poem to focus on the prolific, devastating shootings in schools and public institutions,” said Odessa, a Tamalpais High School student in Mill Valley, California.

“One of the horrific shootings commemorated is the Pulse Nightclub shooting in 2016 targeting the LGBTQ+ community,” added the young filmmaker. “The final call to action of the video reminds the viewer to take action against gun violence by voting.”

Watch the 3 minute film below.