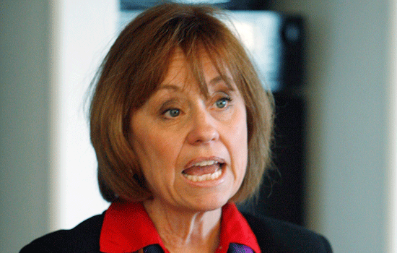 Sharron Angle, who lost in her recent bid for US Senate to Senate Majority Leader Harry Reid by 5 points, has made a statement saying although she was the first to put her hat in the ring to run for Dean Heller’s recently open seat in Nevada, she will now NOT be running. Here’s her official statement:

“Current outcomes concerning the special election have made this election in Nevada an illegitimate process that disenfranchises the electorate. Clearly, no solution that the Supreme Court can make will correct the injury to free and open elections caused by ambiguous laws and subsequent lawsuits.

“I do not have any desire to participate in a process described by others as a “ballot royale” or a situation where the party central committees choose their nominees because it makes a mockery of the most important constitutional element in exercising freedom. Voter participation has been preempted in either case by disallowing primary elections, or in allowing a select group of people to make a decision who otherwise would not be allowed to vote in Nevada’s 2nd Congressional District. The longer this drags out the more it will become a contest of bank accounts and negative campaigning based on personal attacks instead of the important issues that face Nevada and our country.”

“Although I do not intend to participate as a candidate in the special election, I am not ruling out a future run for office. Meanwhile, I will remain busy working as an advocate for the voters of Nevada and this great nation. I thank all my supporters for their dedication and encouragement. I will be making additional announcements soon detailing my plans.”

And the state of Nevada breathes a sigh of relief…