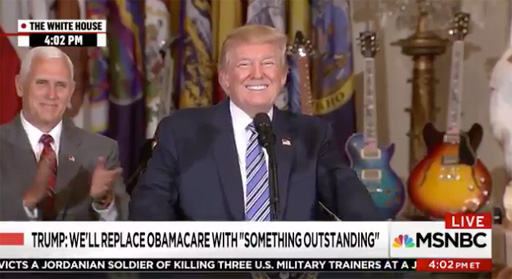 The Senate Republican health care bill came to a crashing halt last night as two more senators announced they would not be supporting the legislation.

Sens. Mike Lee of Utah and Jerry Moran of Kansas joined Kentucky Sen. Rand Paul and Maine Sen. Susan Collins in opposition to the bill. With a bare two vote margin in the Senate, those defections were enough to kill the legislation.

House and Senate Republicans have railed against the Affordable Healthcare Act for years promising to repeal and replace if they had the chance. However, seven months of control of the White House, Senate and House of Representatives has yielded nothing.

The news was apparently a surprise to the Trump White House who, hours before the news broke, held a dinner with Republican Senators.

At a dinner with GOP senators on Monday evening, Trump said the party would look like “dopes” if they couldn’t pass the bill after passing a repeal bill in 2015.

“If the Republicans have the House, Senate and the presidency and they can’t pass this health care bill, they are going to look weak,” Trump said, according to a source familiar with the meeting. “How can we not do this after promising it for years?”

Trump had no idea defections were coming Monday night, according to another White House official with knowledge of the meeting. “Why would we have a dinner like that if we knew people were going to drop out?” the official said.

As Sens. Lee and Moran were preparing their announcement, President Trump said publicly, “We’re going to get that done, and I think we’re going to surprise a lot of people.”

Trump, 4 hours before the GOP health bill collapsed: “We’re going to get that done, and I think we’re going to surprise a lot of people” pic.twitter.com/xothzI26vV

During the presidential campaign, Trump said over and over again how he and the GOP would definitely repeal and replace Obamacare, and they would do it “very, very quickly.”

Let’s take a trip in the way-back machine:

Trump today: “As I have always said, let ObamaCare fail and then come together and do a great healthcare plan.”

Let’s go to the videotape… pic.twitter.com/1JqJH422A4

Remember back in October of 2016 where Donald Trump told his followers, “You’re gonna have such great health care at a tiny fraction of the cost, and it’s going to be so easy.”

FLASHBACK. Trump. February 2017. “Nobody knew that health care could be so complicated.” pic.twitter.com/6ZraSdS6hk

Republicans should just REPEAL failing ObamaCare now & work on a new Healthcare Plan that will start from a clean slate. Dems will join in!

That doesn’t look to be a winning strategy either as Republican Sens. Susan Collins of Maine, Lisa Murkowski of Alaska and Sen. Shelley Moore Capito of West Virginia have all said publicly they would oppose a vote to repeal Obamacare without a replacement. So, that plan is dead on arrival.

The nonpartisan Congressional Budget Office has already scored a repeal-only option and the results are catastrophic. The CBO’s analysis shows 32 million more Americans would be uninsured by 2026 and individual premiums would double.