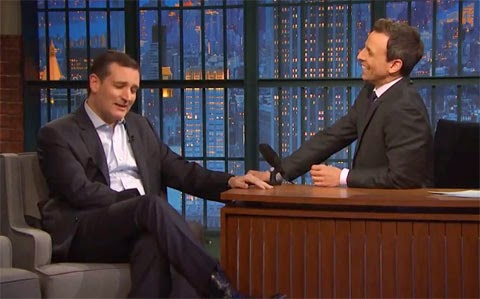 Sen. Ted Cruz of Texas stopped by Late Night with Seth Meyers to talk (rather calmly for Mr. Cruz) about his thoughts on Congress, gay marriage and more.

Seth Meyers does an admirable job of keeping things light but not letting Cruz off the hook.

In the first clip, Cruz talks about reports this weekend that he told a three-year-old girl the world was “on fire” during a political speech.

Sen. Ted Cruz on same-sex marriage, and claims that his “Green Eggs and Ham” filibuster won the Republicans the Senate: