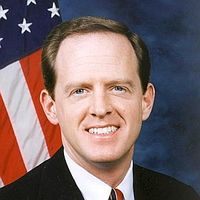 Pat Toomey’s (R-PA) ‘yes’ vote on yesterday’s ENDA cloture vote was a bit of a happy surprise for me and perhaps other who closely follow the legislation.  Toomey took to his Facebook last night to explain his vote:

“I
have long believed that more legal protections are appropriate to
prevent employment discrimination based on sexual orientation. That is
why I supported a provision in the Allentown charter barring the city
government from discriminating against persons on the basis of their
sexual orientation some 17 years ago, in 1996. More recently, it’s also
why I supported allowing gay, lesbian, and bisexual persons to serve
openly in the military.

“So I believe the Employment
Non-Discrimination Act contains very important provisions. However, I
also believe it should be improved, especially as it pertains to
religious organizations. We must strive to reach the appropriate balance
between protecting workers and protecting religious freedom. I voted to
move forward with debate on ENDA with the hope that the Senate will
take up amendments – including one that I plan to offer – to address
this important aspect of the proposed law.”