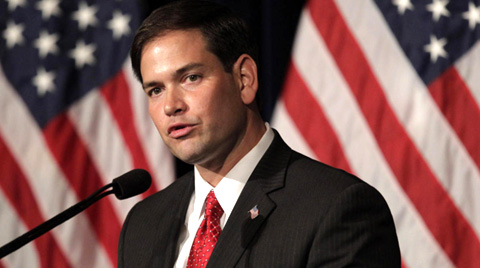 Sen. Marco Rubio, currently in the hunt for the 2016 GOP nomination for president, put some daylight between himself and other Republican hopefuls by saying he does NOT support amending the U.S. Constitution to ban same-sex marriages after the historic 5-4 SCOTUS decision.

“I don’t support a constitutional amendment. I don’t believe the federal government should be in the marriage regulation business,” the Florida senator told reporters after a speech the Cedar Rapids Country Club in Iowa.

“We can continue to disagree with it. Perhaps a future court will change that decision, in much the same way as it’s changed other decisions in the past. But my opinion is unchanged, that marriage should continue to be defined as one man and one woman. The decision is what it is, and that’s what we’ll live under,” he said.

The chances of a constitutional amendment being passed by Congress and two-thirds of states is practically zero with support for marriage equality at or over 60% in the U.S.

And by the way, the haters are really mad at Rubio now.  From anti-gay hate group leader Bryan Fischer of the American Family Association: