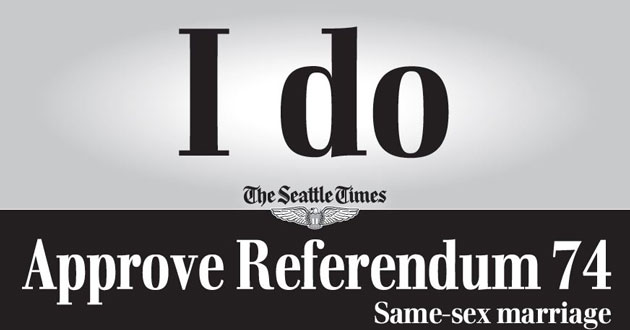 The Seattle Times has launched its own social media campaign in support of same-sex marriage in Washington state.

Do you support same-sex marriage? Join The Seattle Times editorial board’s social media campaign to approve Referendum 74 on the Nov. 6 ballot. In your Sunday Seattle Times newspaper on Sept. 16, turn to the opinion section. Look for the sign that looks like this [above]. Cut it out. Take a photo of you, your partner or your family holding this sign and share it on Twitter or Instagram with the hashtag #IDo74. You can also email the photo to ido@seattletimes.com. Please include names of the people in the photo. By sharing your photo, you give The Seattle Times permission to publish the photo in print and online.

In addition, The News Tribune, the Spokesman Review, and The Columbian all endorsed R-74 and the freedom to marry, Washington United for Marriage reported Monday.

The News Tribune, which serves Tacoma and Pierce County, just south of Seattle, kept the rhetoric simple in its editorial endorsement for Referendum 74: “Why [Washingtonians] should vote yes can be summed up in one word. Equality.”

The Columbian, which serves the greater Vancouver, Wash., area, pointed out that since the state already embraces civil unions, it’s only logical to support full civil marriage for same-sex couples.

The Spokane-based Spokesman Review cites the recycled rhetoric of historic opposition to interracial marriage, which was struck down by the U.S. Supreme Court in 1967’s Loving v. Virginia.

“It’s not appropriate for citizens to vote on basic civil rights,” says the Spokesman Review’s editorial board. “But since the question is on the ballot, we hope Washingtonians will affirm the courageous and compassionate law adopted by the Legislature last spring.”