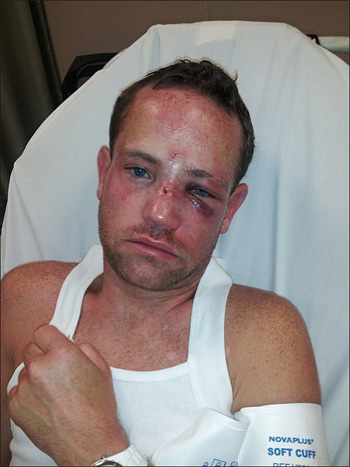 Jason Jacobs was chased in his home neighborhood of Capitol Hill and mercilessly beaten unconscious by a homophobic mob of three men and two women. The 37-year-old told KIRO News that they began taunting him because he was wearing a pink shirt and shoes.

The attack left Jacobs with a broken nose, two busted ribs, a fractured eye socket, and several upcoming surgeries to repair the damage. “I feel unsafe in my own neighborhood,” he said.

What’s more troubling is Jacobs’ claim that the attack happened within eyeshot of a nearby Starbucks, which at the time was still open and serving customers. Of several that allegedly witnessed the attack, only one man notified the police.

Neither men could give a description of the assailants, but Jacobs is hopeful. “Hopefully somebody saw something,” he said. “Hopefully we can get some justice.”