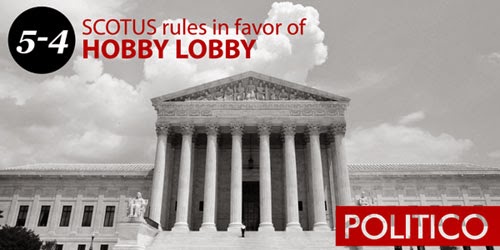 The decision could open the door to other employers seeking to withhold coverage for other medical procedures at odds with firm religious beliefs.

The Human Rights Campaign released this statement regarding the ruling and it’s impact on the LGBT community:

“Instead of protecting religious liberty, this ruling gives license for businesses to use their personal beliefs as a reason to deny people access to basic, yet crucial medical services.”

HRC remains hopeful that the Court’s limitation in this case will be extended to the lesbian, gay, bisexual and transgender (LGBT) community.

We will remain vigilant in the event business owners attempt to use this decision to justify other forms of discrimination, including against LGBT people.

In the immediate aftermath, some members of the LGBT community will feel the effects of this decision; countless lesbian and bisexual women as well as some transgender men rely on contraception.

HRC will continue to work closely with our partners in the women’s and reproductive health movements, as well as other LGBT groups, as this issue continues to be debated.