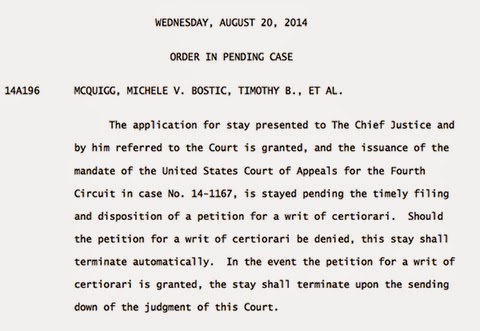 As expected, the US Supreme Court has issued a stay on the 4th Circuit Court of Appeals ruling which struck down Virginia’s same-sex marriage ban.

The application for stay was filed with Chief Justice John Roberts who referred the request to the entire Court.

More from Chris Geidner at Buzzfeed:

Notably, the court stated that the stay will “terminate automatically” if it does not take and denies certiorari in the case — which is the process by which the court formally takes cases. If it grants certiorari, then its stay ends when it “send[s] down … the judgment of this Court.”

Sadly, this again postpones the equal rights of gay and lesbian couples in the Commonwealth of Virginia. Justice delayed is justice denied.

The question now is: Which state’s case will SCOTUS take this fall? We shall see…