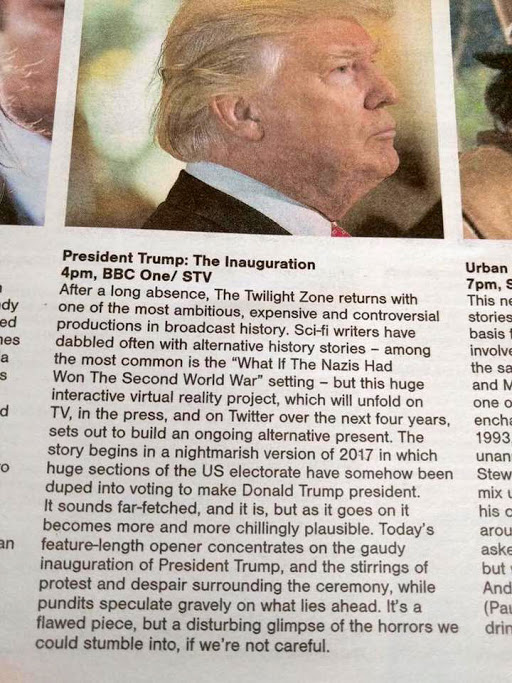 The world is in stitches over a satirical TV listing describing Donald Trump’s upcoming inaugural festivities.

From The Herald in Scotland:

Reviewer Damien Love’s piece in today’s paper previews President Trump’s inauguration – and it has caused a huge reaction across the globe.

He captures the world’s mood before the screening in his Sunday Herald Scotland TV roundup.

In the copy, which is trending in America, he writes about the Donald Trump story as a box office style disaster movie.

His summary of The President Trump: The Inauguration reads: “The story begins in a nightmarish version of 2017 in which huge sections of the US electorate have somehow been duped into voting to make Donald Trump president.”

He then describes it as a “feature-length opener” which concentrates on the “gaudy inauguration of President Trump”.

Love finishes with: “It’s a flawed piece, but a disturbing glimpse of the horrors we could stumble into, if we’re not careful.”

The post has caused a reaction worldwide with social media users dubbing it as a “masterpiece” and the “the most brilliant TV listing ever conceived”.