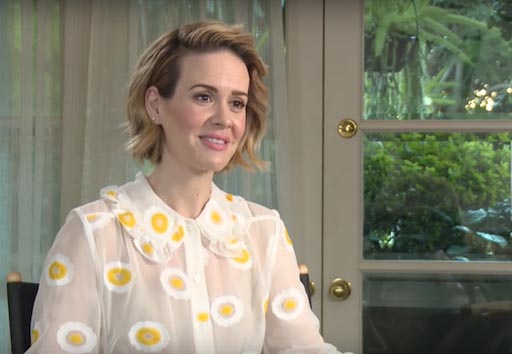 American Horror Story star (currently starring in The Post) opened up to The Edit about her “unconventional” choices in life, like her relationship with actress Holland Taylor.

Via The Washington Blade:

“Early on, when people found out I was with Holland, some said: ‘I think you have to be careful, I’m afraid it’s going to affect your career negatively.’ I was like what? It never occurred to me at all,” Paulson says.

Paulson openly declared her love for Taylor during her Emmys acceptance speech in 2016 when she proclaimed “Holland Taylor, I love you.” The actress admits she debated not giving her girlfriend a shout-out for fear of people’s opinions.

“It occurred to me, ‘Should I not?’ And then I thought, ‘Why would I not?’” Paulson says. “The fact I’m having this thought is wrong. But I had a moment of societal concern; wondering if, maybe, people who didn’t know that about me would be like, ‘Wait, what?’ But then, you know, I did it anyway.”

However, Paulson says she’s aware her relationship with the 74-year-old actress is “unconventional.”

“My life choices are, um, unconventional. I’m with a much older person and people find that totally fascinating and odd, and, to me, it’s the least interesting thing about me. But I do feel a bit unconventional. I am a woman of a certain age who chose not to have children, and who has made my career my priority. I am the captain of my own ship, and I’ve never looked to anyone else to validate that, or tell me it’s okay,” Paulson says.