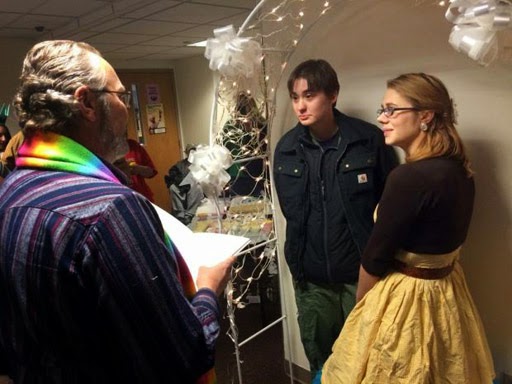 Randi “Doc” Paul and Jill Houk, of Billings, were the first same-sex couple to be married in Yellowstone County.

Even though the ruling came late in the day on Wednesday, a few couples were able to say “I do” yesterday:

Among the first Montana couples to get their licenses Wednesday were Amy Wagner, 56, and Karen Langebeck, 48, who have been together for 22 years.

After hearing about the ruling, they got on the road to get their license.

“Being able to get married and introduce Karen as my wife — that’s a big deal. Now I have a way to describe this relationship that everybody understands,” Wagner said.

In Montana’s most populous county, Yellowstone, the clerk of the District Court said her office was ready to issue licenses.

“For my office, nothing will be different than any other day,” Kristie Lee Boelter said.

In spite of all the shiny happy people, Montana Attorney General Tim Fox still asserts he plans on appealing the ruling until options run out.