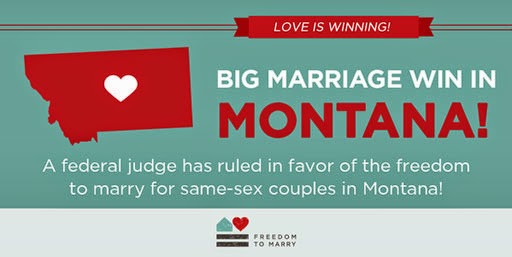 U.S. District Court Judge Brian Morris has just ruled in favor of same-sex marriage in Montana, striking down the ban on marriage between same-sex couples in the state.

The ruling comes as no surprise in that Montana is under the 9th Circuit Court of Appeals jurisdiction, which recently struck down similar marriage bans in Idaho and Nevada.

Morris did not stay his decision and ordered the state to stop enforcing Montana law banning same-sex marriage immediately.

By my count, Montana becomes the 34th state to have marriage equality, with South Carolina to officially become #35 tomorrow, although some marriages have already taken place today in the Palmetto State.

This ruling was in the case Rolando v. Fox, a federal legal case involving four couples, filed by the American Civil Liberties Union of Montana. The couples are Angie and Tonya Rolando, Shauna and Nicole Goubeaux, Ben Milano and Chase Weinhandl, and Sue Hawthorne and Adel Johnson. These couples were either married outside of Montana and denied respect in the state, or want to get married in the state.

From the ruling from Judge Morris:

These families, like all of us, want their children to adventure into the world without fear of violence; to achieve all that their talent and perseverance allows without fear of discrimination; and to love themselves so that they can love others. No family wants to deprive its precious children of the chance to marry the loves of their lives.

Montana no longer can deprive Plaintiffs and other same-sex couples of the chance to marry their loves.

You can read the ruling in it’s entirety below: