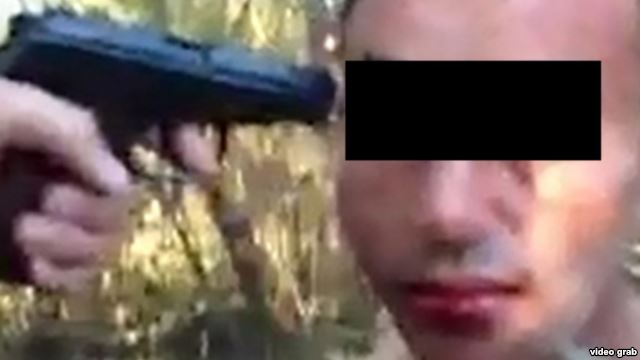 An ethnic Uzbek man was reportedly raped at gunpoint in Novosibirsk, Russia after being threatened by a group of “six or seven” vigilantes, who filmed the alleged incident and posted it online where it began circulating on the mobile phone application WhatsApp, Radio Free Europe reports:

The series of short clips, making the rounds on the mobile phone application WhatsApp show the victim, who seems to be an ethnic Uzbek, being bullied into confessing that he is gay.

He is asked to identify himself and is stripped of his clothes, which are later burned. He is then handcuffed, beaten, insulted, and threatened with a gun. Ultimately, he is forced to sodomize himself by sitting on a bottle, which is then pushed with a bat.

The man, visibly terrified, weeps throughout much of the ordeal.

Radio Free Europe tracked down one of the alleged attackers:

The Uzbek-speaking source, speaking from Russia, confirms that the victim was targeted because he is gay.

“We made him sit on a bottle so that he repents for his sins and comes to reason,” he told RFE/RL’s Uzbek Service. “We did this to protect the dignity of Uzbeks. We live and work here, we are in contact with people of different nationalities. There will be no respect for us otherwise.”

According to the purported assailant, the attack took place on September 11 in Novosibirsk, where he himself is a student, and all the participants were ethnic Uzbeks.

He says the man was first detained by a group of Russian antigay vigilantes who lured him to a fake date through a social-networking website.