The lower house of Russia’s parliament passed a bill that stigmatises the gay community and bans the distribution of information about homosexuality to children.

The State Duma voted 434-0 with one abstention to approve the Kremlin-backed legislation, which imposes hefty fines for holding gay pride rallies or providing information about the lesbian, gay, bisexual and transgender community to minors.

Before the vote, gay activists were arrested and attacked in Moscow on Tuesday outside the Russian State Duma as it prepared to take a final vote on a federal bill banning “gay propaganda”, the AP reports:

Police moved in after supporters of the bill started showering the protesters with eggs and water. Some of the protesters who were not detained were viciously attacked by masked men on a central street a mile away.

The gay protesters were far outnumbered by around 200 anti-gay activists who surrounded them, chanting “Russia is not Sodom”, singing Orthodox Christian prayers and crossing themselves. They threw rotten eggs at the gay protesters.

After scuffles in which one man was knocked to the ground and kicked by the anti-gay activists, police began detaining the gay protesters and bundling them into waiting buses.

Journalist and Putin critic Masha Gessen said she was among 24 people being taken to police stations. Moscow police said about 20 people were detained… 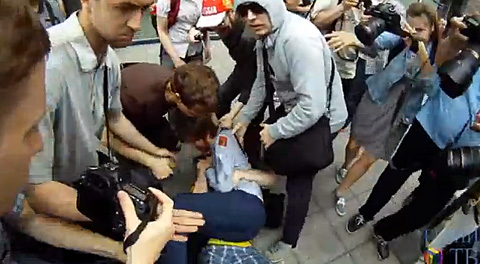