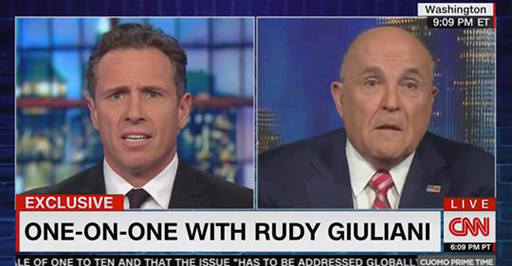 I think this is what we call “moving the goalposts.”

In a stunning reversal, Donald Trump’s legal eagle Rudy Giuliani told CNN’s Chris Cuomo last night that he never said there was “no collusion” between the 2016 Trump campaign and Russian agents.

President Trump’s legal spokesman Rudolph W. Giuliani on Wednesday night appeared to grant the possibility that members of Trump’s campaign did, in fact, collude with the Russians during the 2016 presidential election campaign.

And in the process, he contradicted dozens of previous denials that both the Trump team (and Trump himself) have offered.

“I never said there was no collusion between the campaign or between people in the campaign,” Giuliani told CNN’s Chris Cuomo, before getting cut off.

Giuliani shot back: “I have not. I said ‘the president of the United States.’”

Now, perhaps Giuliani never said the exact words “no one from the Trump campaign ever communicated with Russian interlopers,” but that has been the clear message from Donald Trump regarding his team and the alleged Russian interference during the 2016 presidential race.

“No collusion” has been the Trumpster’s mantra over and over again.

This is first time anyone connected to Trump has opened the door to the idea that someone associated with Trump colluded with Russian forces without his knowledge.

2. February 2017: There were no communications, “to the best of our knowledge”

3. March 2017: There were communications, but no planned meetings with Russians

4. July 8, 2017: There was a planned meeting at Trump Tower, but it was “primarily” about adoption and not the campaign

5. July 9, 2017: The meeting was planned to discuss the campaign, but the information exchanged wasn’t “meaningful”

8. May 19, 2018: There was a *second* planned meeting about foreign help in the election, but nothing came of it either

It’s like quicksand – the more Team Trump fights, the worse off they are.

The collusion evolution, by Rudy Giuliani:

– There was no collusion.

– Even if there was collusion, it‘s not a crime.

– It happened a long time ago.

– I never said there was no collusion.

– I said no collusion…with the President of the United States.

Can’t help but wonder what shoe may be about to drop in the Mueller investigation if Rudy Giuliani is on cable news saying things like, “I never said there was no collusion between the campaign.”