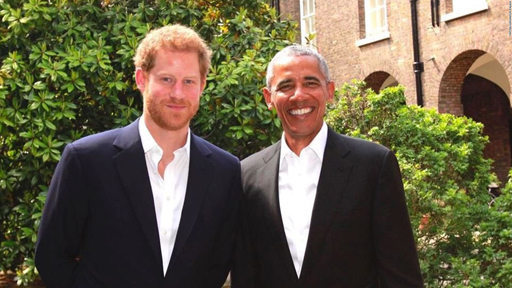 Problem: what to do when you want to invite your new bestie to your wedding and leave a jerk out of the whole event?

Doesn’t sound complicated, does it?

But if you happen to be Prince Harry and it’s the Obamas you want to invite to your royal wedding and politics between Donald Trump and the UK are a testy topic…?

Harry and fiancée Meghan Markle find themselves in a bind wanting to invite the Obamas to their big day on May 19, but Trump could throw a temper tantrum if snubbed.

Britain’s relations with Trump’s White House have sunk to their lowest ebb since his election last year.

The property billionaire does not hide his loathing of Mr. Obama and is expected to be enraged if his predecessor gets the coveted call-up when he won’t.

The young Royal couple’s dislike of the new president is well known.

Meghan made disparaging comments about him on social media during his election campaign last year.

There are deep fears among senior Foreign Office and No10 officials that another perceived national snub will make it impossible for Theresa May to meaningfully engage with Trump.

A senior government source said: “Harry has made it clear he wants the Obamas at the wedding, so it’s causing a lot of nervousness.

“Trump could react very badly if the Obamas get to a Royal wedding before he has had a chance to meet the Queen.”